There is good news for kosher consumers who want their Duncan Hines Moist Deluxe Cake Mixes, certified kosher by the Orthodox Union, to have pareve and non-dairy status. The company has reversed a decision made in 2005 to switch the product to dairy, th

erefore rendering it unusable for cakes that are served with meat meals at the Sabbath table. The product line includes Moist Deluxe Classic Yellow, the best selling cake mix in the country, and other consumer favorites such as Devil’s Food, Lemon Supreme and Butter Recipe Golden.

Pareve production began in September and Duncan Hines has begun shipping product to stores. It should be in most locations by November and December, the company says.

Pocahontas Brand Pork and Beans in Tomato Sauce– Food Service (#10 can) mistakenly bears an unauthorized OU symbol. The product is being withdrawn from the marketplace.

Dominion Farms in Texas has made statements that might be construed as them being under the supervision of the cRc. They have supplied live cattle for kosher shechita, but are not certified by the cRc.

It has come to our attention that packages of barley, such as those used for soup or cholent, may contain larva, insects or even live worms! This problem is not isolated to any specific brand or store. It is strongly suggested that each package of barley, or other similar grains, be inspected prior to use.

Bareman’s Gourmet Heavy Cream is dairy, as indicated on the ingredient panel. However, the “D” was inadvertently omitted and the package only bears a plain cRc. The product is indeed dairy. Future packaging is being revised.

KNORR BEEF BOUILLON (the kosher variety) which contains lactose, has been erroneously been marked as Pareve. The product is Dairy.

So, to recap… Duncan Hines cakes are pareve again, pork is still treif(!), Beef Bouillon is Dairy, and beware of live worms in your cholent. Betei’avon and beware!

Shalom TV made national television news last night–albeit on the comedy channel–when Samantha Bee of “The Daily Show” featured the Jewish-oriented network in her report called “This Week In God.”

Segments from two original Shalom TV series were also played for the audience: “Out of the Mouth of Zion,” a no-holds-barred public affairs forum hosted by award-winning journalist Sidney Zion; and “Mr. Bookstein’s Store,” a children’s program filled with music, stories, and learning.

“Jon Stewart is among the brightest social humorists in America today and his show’s bit on Shalom TV was extremely well done,” said Rabbi Golub, network president & CEO. “Awareness of Shalom TV has grown exponentially since our launch in late summer and we are naturally flattered to be lampooned by one of the most popular programs on cable television.”

Looks like Matel, the makers of the Barbie Doll, has embraced Egalitarian Judaism! This Tefillin Barbie was created by Jen Taylor Friedman, a female soferet (Torah scribe). 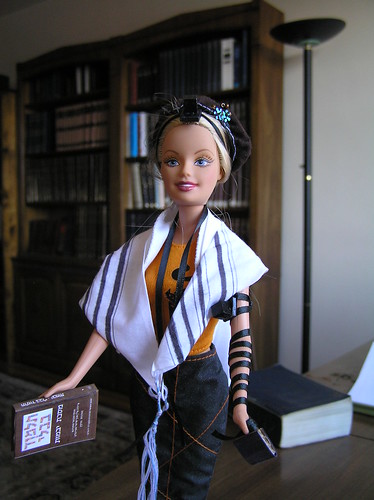 Tuesday evening the Cleveland Cavaliers play the Macabbi Elite basketball team from Tel Aviv at “The Q” (Quicken Arena). Elissa and I will be at the game along with some teens and staff members from Agudas Achim. 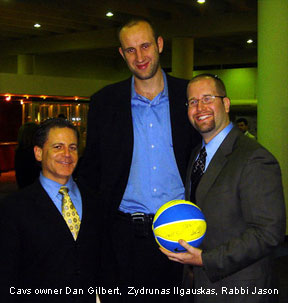 On Monday evening, Elissa and I attended a benefit dinner here in Cleveland for the Friends of the Israel Defense Forces. Cavaliers owners Dan Gilbert and David Katzman were honored. I had the chance to meet all the players and coaches from the Maccabi Elite team. Danny Ferry, the General Manager of the Cavs and former Duke Blue Devil phenom, was also in attendance. The best part of the evening, however, was standing next to someone who is an entire foot taller than me – Cavs center Zydrunas Ilgauskas, who is 7 foot, 3 inches.

My photos from the evening are online.

Here’s a funny column in preparation for Tuesday’s game against Maccabi Elite from the Cleveland Cavaliers’ website. 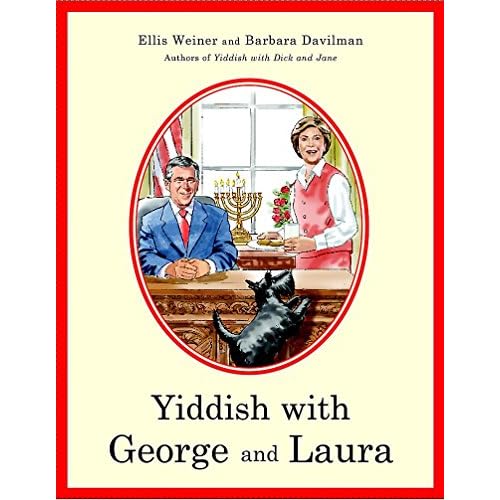 Four richest Americans are Israel-lovers or Jewish
By Sever Plocker

Two Israel-lovers and two Jews are the richest people in America, according to Forbes magazine. The top spot is traditionally occupied by Microsoft founder Bill Gates, 50, whose personal wealth is estimated at more than USD 53 billion.

Gates visited Israel about a year ago and lavished many words of love and praise on the country. The total Microsoft investment in Israel thus far is estimated at more than one billion dollars.

In second place we can find Warren Buffet, 76, the man who acquired Galilee-based Iscar for USD four billion and who said, during a rare and emotional visit to Israel, that he had never seen such a wonderful country. According to Forbes, Buffet is “worth” about USD 46 billion.

Sheldon Adelson, a 73-year-old Jew who changed the face of the casino industry in America and abroad and is married to an Israeli doctor named Miri, leaped to third place. Adelson visits Israel often and contributes large sums of money to hospitals, universities, and the Yad Vashem Holocaust Museum. His fortune is estimated at roughly USD 20.5 billion. Last year he was ranked 14th.

Adelson began to shine as a billionaire after he opened with huge success the Venetian convention, entertainment, and casino venue in Las Vegas. In 2004 he issued his holdings company and since then its stocks skyrocketed by 153 percent.

He builds and develops hotel, convention, and entertainment strips in the island of Macau, a former Portuguese colony and today a special Chinese zone (at a total investment of USD 6.5 billion.) Recently he was awarded the first casino and entertainment project in Singapore’s history, a country that up until now banned gambling.

Adelson gave me a long, exclusive interview in Yedioth Ahronoth where he recounted the story of his life, revealed his social and political views, and offered to invest a billion dollars in an Eilat Casino strip, pledging that all revenues from the investment would constitute a contribution to Israel. He is also the major stakeholder of “Israeli”, a free daily newspaper handed out at public transportation venues.

The top-four list is rounded out by Larry Ellison, 62, the founder of software giant Oracle and a son of Jewish immigrants from Poland.

Ellison adopted his new last name based on Ellis Island at the entrance to the New York port, where millions of immigrants from Europe used as their entry point to America, including his parents. He’s an extrovert, quite arrogant, a programming genius, and a huge fan of yachting and sailing competitions.

Up until now he showed little interest in Israel, even though he has family here, but his acquaintances in California say that recently he has become closer to Judaism and Israel affairs. We will likely see him visiting here. Meanwhile, Oracle has a successful development and marketing center in Israel.

All four hold a combined fortune of USD 140 billion – equal to Israel’s domestic production in 2007. Gates and Buffet established a joint fund for social contributions and have been transferring most of their assets to it gradually. This fund will have USD 60 billion available to it in the future.

Community activism and “Tikkun Olam” is the new joy of the super-wealthy. At the outset of the new Jewish Year, it’s nice to know they are so close to us, ideologically, spiritually, and nationally. We wish them a Happy New Jewish Year.