Here is the article from the Forward.

And here is the Press Release from the Rabbinical Assembly that was just sent out from New York regarding the deliberations of The Committee on Jewish Law and Standards on the subject of homosexuality — specifically on how Jewish Law (Halakhah) views homosexuals considering the biblical injunction against homosexuality. The ruling has a direct effect on whether rabbinical and cantorial schools in the Conservative Movement will be able to accept and graduate affirmed homosexuals to be rabbis and cantors.

Interestingly I do not see any mention of Rabbi Gordon Tucker’s teshuvah or whether it was even considered a takkanah before the committee. I am surprised that Rabbi Leonard Levy’s teshuvah, which argues for reparative therapy for homosexuals, was accepted by the committee (presumably by a minority vote). The bottom line however is that the teshuvah co-authored by Rabbis Nevins, Dorff, Reisner was accepted and therefore the Jewish Theological Seminary and University of Judaism will begin accepting out-of-the-closet gays and lesbians to rabbinical school. The UJ will likely begin this process tomorrow, while the Seminary will not likely begin until next year.

The CJLS of the Rabbinical Assembly concluded its two-day meeting on the subject of Homosexuality and Halakhah, or Jewish Law, this morning. The discussions and teshuvot of the CJLS reflect a deeply shared commitment to halakhah, Jewish Law and the Torah principle of kvod habriot, the God-given dignity of all human beings.

The Rabbinical Assembly is the international professional association of Conservative rabbis. The CJLS is the central halakhic authority for the Conservative movement, which represents more than two million Jews worldwide.

The following statement was drafted at the conclusion of the meeting:

Founded in 1927, the Committee on Jewish Law and Standards is empowered to deal with, and rule on, halakhic issues within the Conservative movement. The role of the CJLS is to issue rulings shaping the practice of the Conservative Jewish community. As such, it is an advisory, not a judiciary body. Parameters set by the committee guide all of the rabbis, synagogues and institutions of the Conservative movement, but within these bounds there are many variations of practice recognized as both legitimate and essential to the richness of Jewish life. As a result, there have been instances when two or more responsa, representing conflicting viewpoints, are validated by the committee. When that happens, the local rabbi determines which of the responsa to follow.

At the CJLS meetings, five specific teshuvot were extensively discussed in a spirit of collegiality and open-mindedness. Two teshuvot — one authored by Rabbi Joel Roth and the other authored by Rabbis Elliot Dorff, Daniel Nevins and Avram Reisner — obtained clear majority support. Rabbi Roth’s responsum “Homosexuality Revisited” reaffirmed the prior position, which denied ordination as clergy to active homosexuals and also prohibited same sex commitment ceremonies or marriage.

In contrast, Rabbis Dorff, Nevins and Reisner, while retaining the Torah’s explicit prohibition, as understood by the rabbis banning male homosexual intercourse, argued in “Homosexuality, Human Dignity and Halakhah” for the full normalization of the status of gay and lesbian Jews. Under this ruling, gay and lesbian Jews may be ordained as clergy and their committed relationships may be recognized, although not as sanctified marriage.

A third teshuva accepted by the CJLS, written by Rabbi Leonard Levy, which upheld the traditional prohibitions, argued that homosexuality is not a unitary condition and urged the development of educational programs within the community to achieve understanding, compassion and dignity for gays and lesbians. There was also some support on the committee for a more comprehensive repeal of the prior ban against homosexual relationships. All authors of teshuvot shared a universal appreciation for the principle of kvod habriot and the welfare of gays and lesbians in our community.

During its deliberations the CJLS did not discuss – nor do any of the papers reflect- any determination regarding gay marriage.

The meeting of the past two days on the issue of homosexuality and halakhah reflects a wide diversity of ideas and opinions. These distinct and divergent opinions may be used by rabbis, synagogues, institutions and individual members of the Conservative movement as a guide in welcoming gays and lesbians in our movement.

The teshuvot may also serve to determine the extent to which gays and lesbians may be admitted into our seminaries and guide the clergy of our movement on the question of whether to initiate commitment ceremonies for gays and lesbians.

The CJLS is composed of 25 rabbis and 6 non-rabbinical members (who are non-voting) and who serve on a rotating basis for a period of at least 5 years. The Rabbinical Assembly, founded in 1901, is the international association of Conservative rabbis. The Rabbinical Assembly actively promotes the cause of Conservative Judaism, publishes learned texts, prayer books and works of Jewish interest, and administers the work of the Committee on Jewish Law and Standards for the Conservative movement. 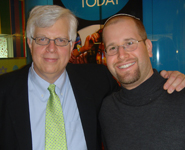 (c) Rabbi Jason Miller | http://blog.rabbijason.com | Twitter: @RabbiJason | facebook.com/rabbijasonmiller
On the same day this blog reached its 33,000th unique visit, my website (RabbiJason.com) marked its 15,000th unique visitor. My goal is to reach 50,000 visits to this blog in 2007. Of course, I will have to post more often than I have been — call it a new year’s resolution.

This morning we had a nice crowd at Agudas Achim for Shabbat services. I spoke about the movie Borat and how Sacha Baron Cohen is guilty of g’neivat da’at (literally, the theft of knowledge) when he deceives people into thinking he is an anti-Semitic Kazakh journalist and gets them to reveal their actual anti-Semitic feelings (or apathy).

I drew on the examples of g’neivat da’at that occur in the Book of Genesis:

I also handed out a source sheet with other examples of g’neivat da’at from other texts including II Samuel and rabbinic sources such as the Tosefta and the Talmud. We studied these texts and I also gave the example of Laura Blumenfeld’s g’neivat da’at in the book Revenge when she deceived the Palestinian family of the jailed man who shot her father, Conservative rabbi David Blumenfeld, into thinking she was just an American journalist interested in interviewing them.

Using the Rolling Stone interview of Sacha Baron Cohen and the Charles Krauthammer article critical of Baron Cohen’s explanation for his deception in the movie, I came to the conclusion in my sermon that:

The reactions to the sermon and text study were all very positive and of course they generated much discussion following services. Many people who didn’t see the movie said they were going to go soon. Some told me that based on my comments they realize they either don’t want to see the movie or feel they would be too upset by the anti-Semitism in the movie.

Overall, I’ve realized that most Jews are not upset by the anti-Semitism in the movie “Borat.” This is probably because Jews “get it.” My concern is for those who don’t “get it.”

The Anti-Defamation League came out with a statement that this is humor and to not take it too seriously. But also noticed that it has the potential to be dangerous:

We are concerned, however, that one serious pitfall is that the audience may not always be sophisticated enough to get the joke, and that some may even find it reinforcing their bigotry.
While Mr. Cohen’s brand of humor may be tasteless and even offensive to some, we understand that the intent is to dash stereotypes, not to perpetuate them. It is our hope that everyone in the audience will come away with an understanding that some types of comedy that work well on screen do not necessarily translate well in the real world — especially when attempted on others through retelling or mimicry.

Regardless of the comedian’s intent, people’s reaction to the anti-Semitism in the film, or people’s outrage or disgust at some of the “gross-out” gags in the film, there is no denying that Sacha Baron Cohen has introduced a new form of humor even different than that of Mel Brooks (“Springtime for Hitler”).

Last week Charles Krauthammer published an article about Sacha Baron Cohen’s movie “Borat.” Krauthammer argued that if Baron Cohen was, according to his out-of-character interview in Rolling Stone, trying to using Borat’s anti-Semitism as a “tool” to expose it in others, then he was looking for anti-Semitism in the wrong country. Rather than coming to America to out everyday

Christians of being anti-Semitic, Baron Cohen (Krauthammer explains) should have stayed home in Europe.

In the Rolling Stone interview, Baron Cohen explains that his Arizona bar stunt where, as Borat, he gets the entire Country/Western bar to passionately sing along with his “Throw the Jew Down the Well,” revealed “indifference” to anti-Semitism. And that, he maintains, was the path to the Holocaust. Krauthammer takes great exception to this comment.

To Krauthammer there really is no anti-Semitism problem here in America. He writes: “This is all quite crazy. America is the most welcoming, religiously tolerant, philo-Semitic country in the world. No nation since Cyrus the Great’s Persia has done more for the Jews. And its reward is to be exposed as latently anti-Semitic by an itinerant Jew looking for laughs and, he solemnly assures us, for the path to the Holocaust?”

He continues: “It is very hard to be a Jew today, particularly in Baron Cohen’s Europe, where Jew-baiting is once again becoming acceptable.”

Krauthammer writes: “Harry Truman used to tell derisive Jewish jokes. Richard Nixon said nasty things about Jews in government and elsewhere. Who cares? Truman and Nixon were the two greatest friends of the Jews…” Well, he can make excuses for anti-Semites all he wants but the fact remains that anti-Semitism is on the rise in our country. I’m sure the ADL is busy preparing their response to the Don Imus tirade, but Krauthammer making it seem that anti-Semitism isn’t a problem here in America is not going to help.

This Shabbat, I will speak about the Borat movie and Sacha Baron Cohen’s deceptive approach to revealing anti-Semitism in America. Is it positive or negative? Is it funny or sad? Is it fair? Is it telling? And perhaps the most important question: Is it dangerous?