Skip to the content
This past Friday evening I sat with my family at Adat Shalom Synagogue as we watched a performance by Storahtelling, which is known for its innovative and arts-focused take on the Torah. The Storahtelling performers interpret the themes from the Torah in new ways, acting out a theatrical midrash. In “Like a Prayer,” Storahtelling veterans Jake Goodman and Emily Warshaw presented a creative exploration of the power of prayer by invoking the stories of our biblical ancestors Aaron the High Priest, Hannah, Sarah and Hagar.

Each of these biblical characters prays in a unique way. Jake and Emily got the audience to consider that a synagogue might be the most traditional place for prayer, but our prayer can take place virtually anywhere. I immediately thought of the recent controversy when Israeli Knesset Minister Meshulam Nahari of the Shas party harshly criticized Gilad Shalit for going to the beach with his father on the first Shabbat of his freedom from Hamas captivity instead of going to the synagogue for prayer as I had blogged about just a day prior. If Gilad Shalit chose to be thankful to God on a beach instead of a synagogue, then who are we to judge?

Watching the Storahtelling production also led to me to consider athletes’ public displays of prayer on the playing field. There are those who are critical of athletes (from professional on down to the high school level) openly giving thanks to God after a good play or a victory. I’ve also noticed an increase in the public displays of religion among the fans at sporting events as well. Sure, fans holding signs proclaiming the John 3:16 verse from the New Testament is nothing new, but lately the TV cameras at sporting events have caught fans visibly praying for their team. This was certainly the case in the recent Major League Baseball playoffs. 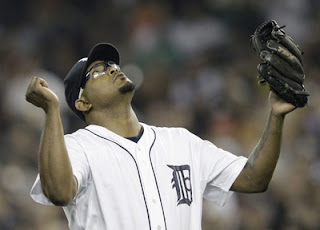 In fact, I was contacted by a reporter from the Detroit Free Press last month during the playoffs as my hometown team, the Detroit Tigers, were playing in the American League Championship Series against the Texas Rangers. She told me she was writing an article about baseball players and religion. Her first question caught me off guard when she asked me if I thought God was a Tigers fan. We then discussed whether religion should have a role in spectator sports. I explained to the reporter that I appreciate when athletes give it their all and are so intent on winning that they don’t hide their religious convictions.

Conservative Rabbi Jason Miller, director of Kosher Michigan, said he took no offense at Christian displays of faith on the field.

“In America, we take our sports seriously and baseball as the American pastime has been elevated to almost the level of religion,” said Miller of Farmington Hills. “When I see a player like Jose Valverde of the Tigers pointing to heaven or crossing himself, I can tell my children that he is a religious person and is grateful to God for his successful performance and God-given abilities.”

Later that night as I sat in the stands at Comerica Park in Detroit watching the Tigers beat the Rangers in Game 3 of the ALCS, I thought more about athletes publicly displaying their gratefulness to God during the game. Watching the players take a moment to pray and thank God was quite meaningful. They are so grateful to be in the position of playing a fun game in front of tens of thousands of fans and millions more on television that they recognize the importance of giving thanks.
We should appreciate when players publicly demonstrate their faith, whether by asking God to help them achieve success and not get injured during the game or by thanking God for their triumph. If we are going to teach our children that God is accessible anywhere and that we don’t have to be in a church or synagogue to pray, then let us embrace the notion that a sports field is an appropriate place for players and fans to welcome in God.
(c) Rabbi Jason Miller | http://blog.rabbijason.com | Twitter: @RabbiJason | facebook.com/rabbijasonmiller