Skip to the content
One year ago today I waited in line to enter the Reichstag. The moment wasn’t lost on me. Almost seventy years prior, the Nazi government made every effort to wipe my people off the face of this earth. And there I was, with a dozen other American rabbis, about to walk into the historic Berlin building that is the seat of the current German government as Chancellor Angela Merkel was addressing Parliament. I smiled as I handed my passport to the German officer and placed my watch and wallet into the bin before walking through the metal detector. What an interesting world we live in.

Several people asked me how I was able to travel to Berlin and spend money in the same country in which the Holocaust was conceived and planned. I’m sure those same people are asking how American-born hockey player Evan Kaufmann can represent the German national team this weekend. Several of Evan Kaufmann’s relatives perished in the Nazi Holocaust. His grandfather Kurt survived Auschwitz before fleeing to the United States.

Kaufmann moved to Germany in 2008, but word is just getting out about this Jewish hockey player whose great-grandparents perished in the Holocaust playing for DEG Metro Stars of the Deutsche Eishockey Liga. The 28-year-old forward hopes to bring Germany a victory in the Belarus Cup in Minsk this weekend when he plays for the German national team. Kaufmann, who is married to Danielle (the couple is expecting their first child in June), received German citizenship in order to play for the national team and is among the top scorers in the German ice hockey league. Kaufmann admits that his teammates are very curious about him being Jewish and often ask him questions. Kaufmann told the UK’s Daily Mail, “I didn’t have to think hard about it. It is a great honour but it will also be a very emotional moment for me when I hear the national anthem played.” 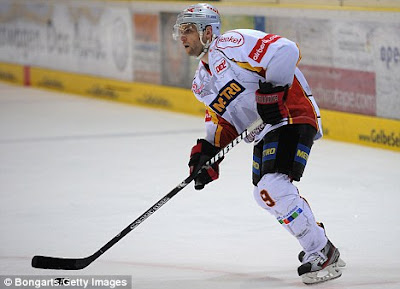 Evan Kaufmann joined the team in the summer of 2008. He was the great unknown to the team of DEG Metro Stars. A college player with had no experience in professional hockey made​​, received a German passport has in a very short time captured the hearts of the audience. His technical finesse and his speed made ​​him a major player in the third line of attack in Dusseldorf. So it was no surprise that his contract was extended for a few months ahead of schedule for two more years. It should be worth it. In the 2010-11 season Kauffman became the second-leading scorer behind Patrick Reimer. Together with Tyler Beechey and James Connor, he made a splendid swirling storm formation, which has established itself as the second offensive series and was instrumental in moving into the playoff semi-final. Kaufmann, whose grandfather came from Germany, began his career in the American Junior League for the River City Lancers. After a very strong year Kaufmann moved to the University of Minnesota to study and play Hockey. After his four years at the University of Minnesota, he devoted himself entirely to hockey.

While Evan Kaufmann isn’t the first Jewish individual to compete for Germany in the post-Holocaust era (a Jewish man swam for Germany in the 1952 Olympics and a Jewish woman swam for Germany in the 2004 Olympics), he is the most notable. It is certainly an interesting story that seven decades after his great-grandparents and other relatives were murdered by the Nazis, Kaufmann is proud to represent Germany on the ice. This is just one more way in which the Jewish community will come to view Germany differently. Never forgetting the massive tragedy of the Holocaust, we understand that this is a new Germany… A Germany we can cheer for proudly in this weekend’s Belarus Cup. Good luck to Evan Kaufmann and his DEG Metro Stars.