Skip to the content
Passover, which begins on March 25, is one of the most widely observed Jewish holidays. Each year during the Passover seder, Jewish people attempt to integrate the old traditions of the holiday with innovations. Mostly, these innovations are meant to keep the children (and many of the adults too!) alert and engaged during the seder.

Innovations in the Haggadah are certainly valuable for keeping things fresh at the seder while still sticking to the centuries-old script. However, for young children it can be a frustrating and kvetchy experience as they watch each adult at the table take a turn reading the midrashic commentary of our ancestors’ exodus from Egyptian slavery — no matter how lovely the artwork is in the newly published Haggadah.

Rabbi Vicki Tuckman, on the ReformJudaism.org website, writes that the “most important thing in leading a Passover seder is feeling that you have the freedom (pun intended) to be as creative as possible.” These days many families — especially those with young children — are scrapping the traditional seder symposium and opting for fun activities that keep everyone participating. Some families I spoke with pitch tents in their living room and tell the Passover story while pretending to be the Israelites camped out in the desert.

In the weeks leading up to Passover, which arrives quite early this year, I had the opportunity to review a few games and activities that I plan to use to keep my kids having fun at the seder this year. Some of them I’ve been using for years and others I’ve only discovered this year. 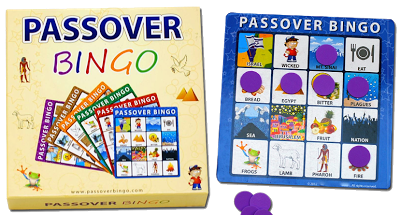 PASSOVER BINGOTamara Pester, a Denver lawyer, sent me this game back in January and my kids started playing it right away. They enjoy playing Bingo and I was thrilled to see them using Bingo cards with some educational value rather than a bunch of numbers. Pester came up with the idea for Passover Bingo when she saw her niece and nephew getting restless during the family seder. “Instead of drudging through the Hagaddah, wondering when it’s time to eat,” she explains, “people will be motivated to follow along with the story of Exodus. Guests at your traditional Seder will be participating and paying rapt attention to the pages, thanks to this easy-to-play game.”

The game retails for $24.99 and features six colorful game boards with Passover keywords such as Egypt and Elijah. The game also includes 96 foam markers, and is recommended for children ages three and up. To help fund the project, Pester turned to Jewcer.com, which offers crowd-sourced funding for Jewish projects. “Actually, the Jewcer people contacted me because they’d never done a promotion with a product before,” she said. The Jewcer site waived fees and helped Pester raise nearly $3,000 for the game. Pester’s sold over 150 of the games through Jewcer, the Passover Bingo website, and several synagogue gift stores. 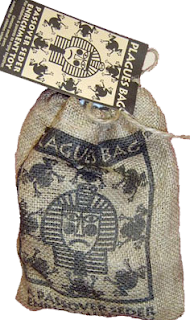 I first discovered the Plagues Bags back in the late 1990s when I saw an ad for them in Moment Magazine. I ordered one and began to use it at my family’s seder which I started leading after my grandfather passed away in 1994. It became a custom at our seder for my young cousins Jeff and Ben to put on the hand puppets of Moses and Pharaoh respectively and act out the dialogue between the two. The two cousins are now in their mid-20s and, while their hands no longer fit in the plastic puppets, they’re good sports and still play along.

Rabbi Alan Silverstein thought so highly of the Plagues Bags that he decided his synagogue would take over the sale of them each year. In 2001 my wife and I moved to Caldwell, New Jersey where I served an internship at Congregation Agudath Israel with Rabbi Silverstein. He put my wife in charge of the Plagues Bags and that year she reported to me that they had sold several thousand in the week before Passover.

What’s so great about the Plagues Bags? They encourage the seder participants to have fun during what could otherwise be a very tense time during the seder. The horrible plagues God brought upon the Egyptians, including the death of the firstborn children, can be difficult to explain to children. It’s also getting close to the festive meal and everyone is hungry at this point in the seder. The “toys” inside the Plagues Bags help the seder leader keep everyone’s attention and bring some levity to the “talk-feast”.

JEWISH HOLIDAYS IN A BOX
At JewishHolidaysInABox.com, they’ve completed a new guide called “Celebrate Passover: How to Plan a Fun, Simple Seder”. This creative guide helps families who are novices when it comes to the Pesach seder or want to make their standard seder more engaging and fun. Their The 3-part downloadable package comes with a 36-page PDF + 2 audio tutorials and is available on the Jewish Holidays in a Box website.

RESOURCES FOR INNOVATIVE AND FUN SEDERS
Two books I recommend to help seder leaders enliven the seder each year are David Arnow’s “Creating Lively Passover Seders” and Ron Wolfson’s “The Passover Seder: The Art of Jewish Living”. Danielle Dardashti and Roni Sarig also have a great chapter with some fun Passover seder projects for children in their book “The Jewish Family Fun Book”. All three books are published by Jewish Lights Publishers. This year the Foundation for Jewish Camp has published an activity book for the seder to promote its “One Happy Camper” program. The activity book includes games, Madlibs, and even Capture the Flag using the afikomen.

SKITS
Many families perform skits during their seder, which is a great way to observe the commandment that we should all act as though we were actually part of the exodus from Egyptian bondage. Behrman House, a wonderful educational publishing house, has a couple scripts on their website. “Seder Time” is a skit by Stan Beiner, a well known Jewish educator who created Sedra Scenes. Meredith Shaw Patera’s “The Courage of Nachshon” is another good skit available on the Behrman House Passover activity website. Aish Hatorah lists ways for participants to act out the ten plagues on their website.

On Facebook and Twitter I asked people to share some of the innovative activities they have adopted at the seder to keep the children participating and the adults from dozing off. Here are some of my favorites:

Rabbi Michael S. Jay: We’ve had children prepare commercials for Matzah or other symbols of the Seder.

Rabbi David Locketz: I find out what songs all the kid who are coming have learned at school and then incorporate them into magid. Give out parts in advance and we act it out in song and brief dialogues.

David Kaufman: We had all the kids bring knapsacks filled with the items they would want to make sure they brought out of Egypt. Then, when we begin Maggid, we all get up from the table, they take their knapsacks, and we make an “exodus” into the living room. There, we start doing Maggid, and the kids also show us what they would bring and explain why.

Prof. Michael Satlow: I had the kids do a play of the Exodus from the Egyptian perspective. It really taught me something and opened discussion.

Jennifer Levin Teper: I make oragami frogs and use them as placecards. Then everyone, can “jump” them during the seder. Our favorite is trying to get it to land in your water glass.

Melanie Dunkelman Hartong: I found silly masks of the plagues at my local Kroger- kids thought it was hysterical!!

Lynn Davis: We throw plagues (tiny plastic animals, etc.) but I realize that a rowdy seder isn’t for everyone!

Rabbi Judah Isaacs: My sister buys a Pesach puzzle and gives out the pieces for answers to questions. She has the kids put the puzzle together during the Seder.

Shawn Broida: When our kids were little and we knew we couldn’t get 6 cousins under age 8 to sit through a seder, we decided to do a bedouin seder on the floor and let them roam! Aside from a few almost disasters with the seder plate getting kicked across the room, it was more relaxing for everyone and the kids had a ball!

I wish everyone a Chag Sameach… may your seders be educational, innovative, and memorable!