Skip to the content
I already had a blog post planned for today. I was going to write an open letter to David Stern, the commissioner of the National Basketball League (NBA) in which I was going to publicly criticize him for allowing the NBA to only give Ron Artest (er, sorry Metta World Peace) a slap on the wrist with a seven game suspension. Artest blatantly elbowed James Harden on the back of his head after Artest’s slam dunk the other night. It was a vicious blow to Harden’s head that left him with a concussion. With Artest’s history as a trouble maker Stern should have banned him from the league.

My open letter to the Commissioner was going to ask him how I’m supposed to let my children watch NBA games if this is the type of behavior they will see. I don’t need Ron Artest to be a role model for my children; they have enough positive role models in their lives already. However, I cannot in good conscience allow my children to watch a professional basketball game (or even the highlights on ESPN) if such cheap shots are going to become commonplace in the NBA without serious repercussions.

And then I saw the news today. Detroit Tigers outfielder Delmon Young was arrested outside of the hotel where the team was staying in New York City. Young was “highly intoxicated” according to a police source and he was arrested after allegedly shoving a man to the ground and making anti-Semitic remarks. The Detroit Free Press reports that Young faces an “aggravated harassment hate crime charge” for the anti-Semitic remarks he made during the incident. 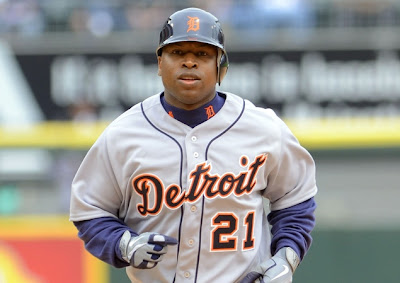 When I read the news about Young, my heart sank to the floor. My oldest son is 8. In the past year he has become a die hard Detroit Tigers fan. He knows all the players by name. He knows their uniform number and their statistics (just like I did when I was a Tigers fan at that age). How am I supposed to explain to my son that Delmon Young was drunk, got into a street fight, yelled an anti-Semitic slur and got arrested? To my son, Delmon Young is a hero. He cheers for him. He prays that Young will hit a home run when he comes up to bat. I don’t think that it ever occurred to my son (or to me for that matter) that Delmon Young hates Jews in an inebriated, full-of-rage Mel Gibson sort of way.

Thanks to the Detroit Tigers organization and specifically owner Mike Illitch and Dave Dombrowski, the teams President/CEO/General Manager, baseball has become exciting again here in Detroit. The team has really made a concerted effort to reach out to children. That is great, but it also means that the organization has a responsibility to handle this matter quickly and appropriately. Delmon Young needs to be treated for his alcohol problem and a response to Tigers fans must be made soon concerning his anti-Semitic slur.

For me, I still don’t know how I will explain this to my son or if I will at all. The bottom line is that no one is asking professional athletes to raise our children. They are great athletes and not always shining examples of virtuous human beings. However, they need to know that children are watching. Impressionable children are watching how athletes behave on the field or on the court, as well as outside of their hotels. The NBA and Major League Baseball are both doing great things to help their athletes give back to the community and be good citizens. But they have to take care of the bad apples as well. I don’t know what the appropriate punishment for Delmon Young should be, either within the Tigers organization or in Major League Baseball, but I know that a strong message has to be sent to the young fans so they know this behavior is not tolerated.