Skip to the content
After the Dead Sea Scrolls were discovered in a cave in Qumran in the winter of 1946–47 by Muhammed edh-Dhib, a Bedouin boy, and his cousin, it still took two decades until they were placed on display in a museum. Now, about 65 years after their discovery they can now be accessed online.

Today, the Israel Museum launched the Dead Sea Scrolls Digital Project, which provides access to high-resolution images of the scrolls, as well as additional data and background information. This is a joint project between the Israel Antiquities Authority and Google, which has a research and development center in Israel. 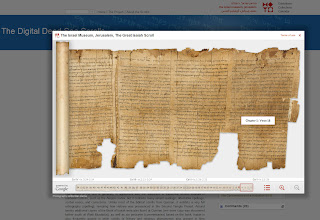 So far, five scrolls have been digitized: the Great Isaiah Scroll, the Community Rule Scroll, the Commentary on Habakkuk Scroll, the Temple Scroll and the War Scroll. It marks the first time that the collection of scrolls is being photographed in its entirety since the 1950s. The entire collection includes 900 manuscripts comprising about 30,000 Dead Sea Scrolls fragments.

“We are privileged to house in the Israel Museum’s Shrine of the Book the best preserved and most complete Dead Sea Scrolls ever discovered,” said James Snyder, Anne and Jerome Fisher director of the Israel Museum. “They are of paramount importance among the touchstones of monotheistic world culture, and they represent unique highlights of our Museum’s encyclopedic holdings. Now, through our partnership with Google, we are able to bring these treasures to the broadest possible public.”

The site allows for comments from users and offers insightful videos to further ones understanding of the scroll being viewed. The Leon Levy Dead Sea Scrolls Digital Library project is being funded with a major gift from the Leon Levy Foundation, with additional major funding from the Arcadia Foundation and the Yad Hanadiv Foundation.

Academics once had to travel to Israel to research the Dead Sea Scrolls, but the scrolls’ accessibility online should now yield an even greater amount of higher biblical scholarship in the coming years. This is not Google’s first time being involved in digitization project of this nature. Past projects have included the Google Art Project, Yad Vashem Holocaust Collection and the Prado Museum in Madrid. The scrolls are accessible online.