Of course there have also been famous fictional bar mitzvah celebrations like “Krusty the Klown’s Wet ‘n’ Wild Bar Mitzvah” on “The Simpsons” and Ari Gold’s daughter’s bat mitzvah on “Entourage”. 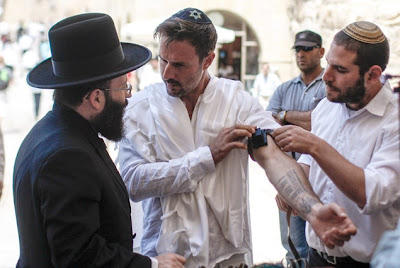 David Arquette is currently in Jerusalem shooting an episode of his “Mile High” show, which airs on the Travel Channel. While in Jerusalem, Arquette attended a bar mitzvah ceremony and was asked if he would like to have one as well. Rabbi Shmuel Rabinowitz, the rabbi of the Western Wall, officiated at the ceremony in which Arquette wore a tallit (Jewish prayer shawl) and tefillin (prayer phylacteries). Two years ago, Arquette told the Jewish Journal, “I wanted a bar mitzvah but didn’t have one as a kid… maybe for my 40th birthday.” 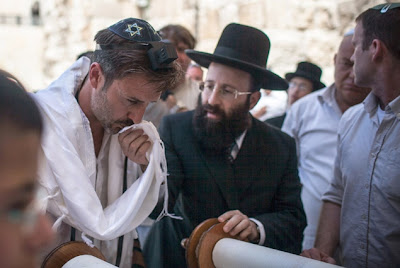 According to the Jewish Or Not blog, David Arquette is Jewish. His mother was born Jewish and is the daughter of a Polish Holocaust survivor. Arquette’s father converted to Islam. Arquette has been married to actress Courtney Cox, who starred in “Friends” television sitcom and co-starred with Arquette in the “Scream” films.

On his personal Twitter account, Arquette posted: “I had my bar mitzvah today at the wall. Finally I’m a man.”

If anyone would like to plant a tree in honor of David Arquette’s bar mitzvah, simply click this link.