Skip to the content
Leave your funniest caption in the comments section: 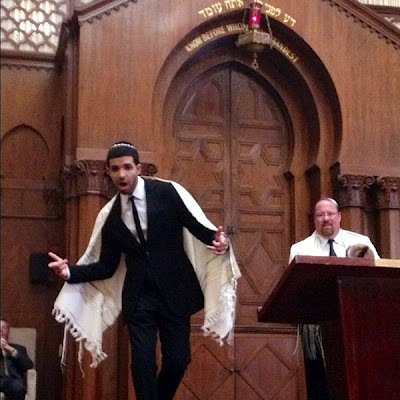 (c) Rabbi Jason Miller | http://blog.rabbijason.com | Twitter: @RabbiJason | facebook.com/rabbijasonmiller
In Judaism when a Jewish man turns 83 he ceremoniously celebrates his bar mitzvah for the second time. The reason for this is that Judaism believes that the length of a man’s life is 70 years so at 83-years-old he symbolically turns 13 once again. Aubrey Drake Graham, AKA “Drake”, is only 26 and far from the traditional age of getting a re-do on the bar mitzvah ceremony, but that didn’t stop the Jewish rapper from having what he has termed a “re-bar mitzvah”. 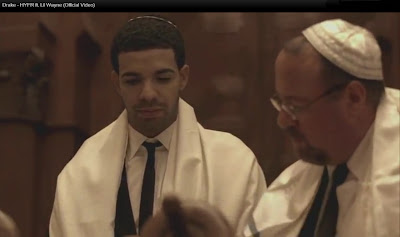 Apparently, last fall on October 24, 2011 (a Monday) Drake decided to have a re-bar mitzvah as a re-commitment to the Jewish religion. We learn this from Drake’s new music video for his song “HYFR” (look it up!). The video opens with footage of a cute little Drake as a child at a friend or relative’s bar mitzvah saying “mazel tov” to the camera. There is also video footage of the young Drake dancing at the bar mitzvah.

The next part of the music video shows the outside of Temple Israel, a Reform congregation in Miami. The camera then takes us inside Temple Israel where we see Drake’s bar mitzvah ceremony, including his reading from the Torah after kissing the the inside of the scroll with the tzitzit (fringes) of his tallit (prayer shawl).

Then things get a little crazy and become more typical of a rap video. Of course Drake gets lifted in a chair for the traditional Horah dance, but there is also the debauchery one would expect of a party attended by the likes of Lil Wayne (in a panda suit!), Trey Songz, Birdman and DJ Khaled.

According to an interview with Drake (whose mother is Jewish), his original bar mitzvah took place in a nice Italian restaurant where he wore a yarmulke and read from his “portion”. However, he says he never went to Hebrew School (“I cheated!”). Perhaps that’s why he was eager to have a “re-bar mitzvah” in October. Matisyahu once said about Drake: “He’s Jewish, but he’s not representing Judaism. He happens to be Jewish just like Bob Dylan happened to be Jewish, but what I’m doing is really tapping into my roots and culture, and trying to blend that with the mainstream… Drake’s being Jewish is just a by-product.”

The “HYFR” video is too explicit for this blog, but it is available on YouTube by searching for “Drake” and “Bar Mitzvah”.