Skip to the content
I spent the last week in Israel as part of a solidarity mission sponsored by the Masorti Foundation and the Rabbinical Assembly. The goal of the mission was for Conservative rabbis in North America to learn more about the Masorti (Conservative) Movement in Israel and to show solidarity with the dozens of Masorti congregations throughout the country. The mission was subsidized by Israel Tour Connection (ITC), a New Jersey-based tour provider company headed by Larry Ritter. Spending time in Israel with Larry, I learned about his passion to bring thousands to Israel each year in order to support the Jewish country. The following is an article I wrote about Larry’s passion and principle objective in life. This was originally published on The Times of Israel and on the Huffington Post.

There are Zionists and there are lovers of Israel. Some are both.

On a United Jewish Appeal mission to Israel in 1982 Larry Ritter claims he became a full Jew. There was no conversion involved as he was born Jewish and raised in an Orthodox home. However, the Livingston, New Jersey native visited Israel for the first time that year and says he never fully felt Jewish until that experience. Thirty years later Ritter has had his passport stamped close to 100 times with the seal of the Jewish state.

Ritter, 69, firmly states that one cannot be a complete Jew without being a Zionist and loving the land of Israel. For that reason, he launched Israel Tour Connection (ITC) in 1989. Sitting at his kitchen table with his rabbi at the time, Samuel Cohen of Beth Shalom in Livingston, Ritter expressed his desire to help people get to Israel and have a taste of the memorable experience he first had earlier that decade. He wasn’t looking to start a travel agency, rather he wanted to become a reliable tour provider in an effort to help others feel the excitement and love for Israel. 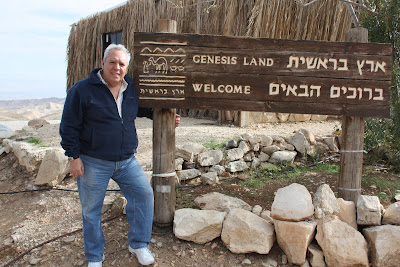 Today, ITC sends over one hundred groups to Israel a year which translates to tens of thousands of pilgrims, both Jewish and Christian. They might be part of a synagogue, church or organizational mission or they might be part of a family traveling to Israel to celebrate a child’s bar or bat mitzvah in Jerusalem or atop Massada.

Ultimately, Jewish continuity is the banner Ritter waves in his effort to support Israel through tourism, one of the country’s largest industries. “My fear is that each new generation of Jews gets farther away from the Holocaust and they don’t have that communal memory to bring them closer to Israel. And drawing people closer to Israel is my core mission in life. I do this because I believe in it,” Ritter told me recently. In that vein his company identifies homogeneous groups to take to Israel. The majority of groups are from Conservative, Reform and Orthodox congregations throughout North America as well as family trips. However, the past decade has seen a steady increase in the number of Catholic, Christian and Evangelical groups Ritter has sent to the Holy Land. In a few weeks Ritter will accompany a group of African American tourists through the AME Church to Israel. Through the years not all of those groups have been homogeneous either. He has also brought interfaith delegations to Israel, building bridges between Christian Zionists and Jewish leaders.

The first time I traveled to Israel with Larry Ritter was in January 2003 when I was a rabbinical student at the Jewish Theological Seminary in New York. As the U.S. was about to send troops to Iraq and Israel had once again been facing acts of terrorism, Ritter approached the Seminary and offered to subsidize a solidarity mission for students and faculty. After securing funding from the Ministry of Tourism and adding funds out of his own pocket, students were asked to pay only $300 for the four-day trip to Tel Aviv and Jerusalem. At a time when Israel’s hotels were half empty Ritter helped over 100 students travel to Israel to show their support to their brothers and sisters in the Jewish state.

Fast forward ten years and I now find myself back in Israel with Ritter. This time Ritter determined it was necessary for North American Conservative rabbis to travel to Israel and show solidarity with their sister congregations throughout the country following the recent conflict with Gaza. Once again, Ritter helped subsidize the mission with his own funds. “Not only did I see a need to come to Israel following a challenging time for Israelis, but I knew how critical it was that Masorti (Conservative) congregations around Israel see that their movement’s rabbis from North America are willing to take time out of their busy schedules and come to Israel and give them strength,” Ritter explained.

On this most recent excursion, Ritter brought a duffle bag in addition to his own suitcase to Israel. Inside the duffle bag were two Torah scrolls to be donated to Masorti congregations in Israel. Not only does Ritter have a knack for finding the best hotel values, but he’s also developed a gift for locating Torah scrolls in American synagogues to be gifted to the small Israeli congregations that need them. As one rabbi who traveled with us in Israel this week put it, “What makes Larry so special is not only that he motivates people to come to Israel, but that he goes the extra mile.” Rabbi Harold Kravitz of Minnetonka, Minnesota continued, “He always wants to help. He’ll do whatever it takes to bring one more person to Israel or one more Torah to Israel for a fledgling congregation.”

With his staff of eleven, including his wife Marlene, in his Livingston, New Jersey office Ritter coordinates each trip with his satellite office in Israel and submits each itinerary to a “Situation Room” of the IDF to ensure the group’s safety. Each tour is custom designed based on the needs and desires of the traveler. Larry considers how many times the travelers have visited Israel in the past, what sites they might enjoy, and which areas of the country would have the deepest impact on them. Barbara Sutnick, ITC’s educational director in Israel explained, “Because of Larry’s vision, our goal is to bring to life all the wonder that is Israel through our tours – its places and its people, its past and its present.”

Each time he comes to Israel, Ritter feels like he’s home. “Israel is where I go to recharge my batteries,” he says. Although, his metaphorical batteries aren’t the only ones that get recharged while in Israel. Ritter’s two cellphones are constantly ringing as he makes arrangements with the airlines, various hotels, tour bus operators and other providers, as well as with religious leaders back in the U.S. eager to plan their next trip.

Through his Zionism and his love of helping people discover that same beauty and inspiration that he found in Israel thirty years ago, Larry Ritter is doing his part to keep Israel’s tourism industry vibrant and strong. Nothing seems to deter him from connecting young and old with the land of Israel. As he stated proudly, “So long as we have an Israel I’ll be sending people there.”