Skip to the content
Fans of the long-running Showtime series “Weeds” know that writer and creator Jenji Kohan is not afraid to pepper the show with Jewish themes. While the show, now in its final season, has changed its flavor over the years and gained some critics, many devotees still enjoy the story about a marijuana-selling widowed mother from the suburbs and her family’s experiences.

Throughout the different webs of relationships, Kohan, who is Jewish, has managed to bring esoteric Jewish concepts into the series, including in a recent episode that featured ruminations on the power and purpose of immersing in the mikvah. Perhaps because the show is on the subscription-based Showtime network, its Jewish essence hasn’t been widely covered, but Kohan, who considered attending rabbinical seminary, has taken on some controversial Jewish subjects in the past eight seasons. Here are the top Jewish references:

* Unveiling (Season 1, Episode 8): It’s likely that many viewers thought this was a funeral service at the cemetery, but Jewish fans recognized the ritual as the unveiling of Judah Botwin’s tombstone. Once the family returns from the cemetery, Nancy Botwin (Mary-Louise Parker) explains her day to the Drug Enforcement Agency agent who becomes her boyfriend: “It’s where they unveil the gravestone. It’s a Jewish thing. I know you’re thinking, ‘She doesn’t look Jewish.’ I come from Welsh stock … I’m not Jewish. My husband. He’s dead now. He was Jewish.”

The episode also tackles the controversial topic of Jewish lineage when the Orthodox rabbi tells the Botwin boys, Silas (Hunter Parrish) and Shane (Alexander Gould), that they are not legitimately Jewish because their mother isn’t Jewish and they had never converted to Judaism. The young Shane is hurt by the news and takes out his aggression on his wrestling opponent, whose foot he bites after yelling “Sh’ma Yisrael!”

* Rabbinical School (Season 2): Nancy’s out-of-work brother-in-law Andy (Justin Kirk) decides the best way to keep from returning to military service will be to become a rabbi. He enrolls in the fictional Hamidrash L’Torah rabbinical school, where he falls in loves with the dean, the attractive Israeli Yael Hoffman (Meital Dohan). While much of the ongoing rabbinical school experience is silly, some rather serious issues are discussed, including Andy’s theological convictions, which come up while he is writing his admissions essay.

* Euthanasia (Season 4, Episodes 2 and 3): The Botwins leave the Agrestic/Majestic community after it burns and relocate to the home of Nancy’s father-in-law. There they find Lenny Botwin (Albert Brooks) and his mother, Bubbie (Jo Farkas), who is hooked up to a ventilator. The Auschwitz survivor regains consciousness and asks Lenny to kill her. The Botwin men discuss the wisdom and ethics of euthanizing Bubbie, but in the end Lenny agrees to have Nancy kill Bubbie.

* Sitting Shiva (Season 4, Episode 4): While shiva is one of the most well-known Jewish rituals, not many television shows have accurately portrayed it. This episode focuses entirely on the Botwin family sitting shiva for Bubbie at son Lenny’s insistence. Several laws and customs of shiva are mentioned during the episode, including the understanding that family members should not cook for themselves. A shiva candle is lit, and friends and neighbors come to pay their respect.

* Levirate Marriage (Ongoing): While Andy mentions the Jewish concept of a Levirate marriage to his sister-in-law Nancy at one point in the show’s history, the theme is an ongoing one. The Torah dictates that an unmarried man must marry his brother’s widow, but that applies only if the widow has not had children. So even if the law would not apply in Nancy and Andy’s case — both because she already has children and she is not Jewish — the constant and sometimes awkward attraction between them seems continually to remind the viewer of Andy’s enjoyment and frustration over the hunt.

* Bris (Season 5, Episode 8): Nancy gives birth to Tijuana Mayor and cartel leader Esteban Reyes’ baby boy, but the father (Demian Bichir) refuses to sign the birth certificate for fear of its effect on his political career. Andy signs the birth certificate as the boy’s father and insists on a brit for the baby, whom he promises to raise proudly as his Jewish son. At the brit, baby Stevie is given the Hebrew name Avi Melech (son of a king).

* Mikvah (Season 8, Episode 5): At the end of this episode, Rabbi David Bloom (David Julian Hirsh), the rabbi/hospital chaplain, finally confronts Nancy, who has been secretly swimming in his backyard swimming pool. This is the same rabbi who talks theology with Andy at the hospital when he is concerned about Nancy’s well-being after she is shot in the head at the end of the previous season. When Nancy explains that swimming in the pool feels like a sort of rebirth for her, the rabbi explains the Jewish concept of tevillah (immersion in a mikvah). This is likely the most spiritual and New Age definition of the mikvah ritual that has ever been offered on television.

Kohan has said that she’s not afraid to take on inherently Jewish concepts on the show no matter how esoteric they may be. For the many Jewish fans of “Weeds,” there have been many instances of surprise and pride over the years after unpredicted mentions of a Jewish ritual or theme. As the final season comes to a close, there may just be more Jewish references to come.

UPDATE: I just received word that the show filmed scenes for an episode at Adat Ari El synagogue in Valley Village, California last week. They used the historic chapel for one of the scenes. I’m thinking this can mean a Nancy-Andy or a Jill-Andy wedding… We shall see!

Originally published at JTA.org and cross-posted to the PopJewish.com blog.

(c) Rabbi Jason Miller | http://blog.rabbijason.com | Twitter: @RabbiJason | facebook.com/rabbijasonmiller
What has Oprah Winfrey been doing since ending her long-running afternoon talk show last May? If your only news source was JTA.org (the Jewish world’s version of the AP), you might think that she has embraced Judaism on the level of Madonna or Demi Moore. 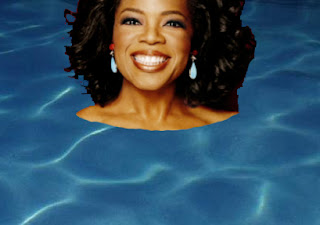