Skip to the content
One of the highlights of the Foundation for Jewish Camp’s Jewish Camping Conference a year ago was the chance for me to get to know Nancy Lublin. I had learned about Nancy several years earlier after reading an article about her mitzvah project that turned into a successful nonprofit company.

I spoke with Nancy, CEO of Do Something for the past ten years, about her recent book Zilch: The Power of Zero in Business, encouraging teen philanthropy, and how Jewish summer camp can instill lifelong entrepreneurial skills in young people. But what I found most interesting in our conversation was how Nancy founded Dress for Success in 1996 with a $5,000 inheritance from her great-grandfather Poppy Max.

Nancy wanted to honor her grandfather’s memory and spirit of philanthropy by using his hard-earned money to help other people blaze new beginnings. With three nuns from Spanish Harlem, Nancy started Dress for Success in New York. She then moved on to found Dress for Success Worldwide, the national support center for all Dress for Success Affiliates. Dress for Success provides interview suits, confidence boosts and career development for women and has served more than 650,000 women around the world. Women are referred to Dress for Success by not-for-profit and government agencies including homeless and domestic violence shelters, immigration services, and job training programs.

What Dress for Success does for thousands of women is a great act of loving kindness, but what I’ve always loved about her start-up philanthropy is the name: “Dress for Success.” How we dress really does lead to our success. Think about what the image we project based on what we wear. Our clothes communicate a lot about our personality and our interests. The dictum that “you are what you wear” is actually true.

This Shabbat, Erev Purim, we read Parashat Tetzaveh. In the Torah portion, Moses is ordered to appoint his older brother Aaron, and Aaron’s sons, to fill the priestly role. And just as last week’s parsha gave the explicit directions for the building of the tabernacle, this week we learn the precise details of the priestly clothing. Modern biblical scholar Nahum Sarna writes that “just as sacred space must be differentiated from profane space, so the occupants of the sacred office must be distinguishable from the laity. Hence, special attire, the insignia of office, is ordained for Aaron, the archetypal High Priest, and for his sons, the priests of lower rank.”

The first part of our parsha is most concerned with the high priest’s unique garb; not only with what Aaron will wear, but also with who will make it. God commands Moses: Next, you shall instruct all who are skillful, whom I have endowed with the gift of skill, to make Aaron’s vestments for consecrating him to serve Me as a priest. It’s not even enough that Aaron will have the most unusual and distinctive garments; God also wants the best designers to fashion his wardrobe — the Ralph Laurens and Donna Karans of the time. And these fashion designers are instructed to use the finest materials to construct this attire — gold, magnificent colorful yarns, and the finest linen around. 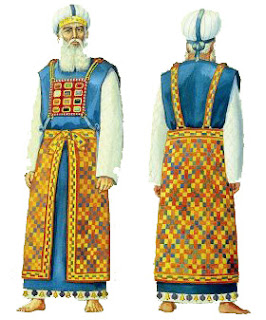 Next, God informs Moses of the particular vestments that the priests will wear. The Choshen – the breastplate, the Ephod, a robe, tunic, headdress, and a sash. These garments, as you can imagine, made the priests stand apart from the rest of our ancestors. The Torah goes to great lengths to cross every T and dot every I in describing the priests’ clothing for their distinctive role — colors, lengths, widths, and material were all specified with great care. But this is certainly not the most exciting section of the Torah, so we must ask why all this fashion minutiae? What’s the big deal with the priests’ clothing?

Why is the name of our Moses, the great leader of our people, not mentioned even once in this Torah portion, but instead we know the five materials that went into the production of the yarn to create part of the priest’s garb? The answer I believe is back at the beginning of the parsha when God commands the making of these vestments. What is God’s rationale for these vestments? L’chavod ultif’aret — For dignity and splendor.

L’chavod ultif’aret are two words that are part of the blessings recited after the chanting of the haftarah. The medieval commentator Sforno explains the use of these two words. The vestments, he writes, were for the dignity of God and to lend splendor to the office of the priest so that he would be revered by the people. Elaborating on Sforno’s opinion, the vestments were as much for the dignity of the priests who wore them as they were for God’s dignity. What we wear speaks volumes about us.

The famous computer company IBM had a long-standing dress code in effect at their offices worldwide. Men had to dress in a dark colored suit, could only wear a white dress shirt, and could select a necktie of any conventional color; so long as it was solid – no patterns. For women, it was mostly the same – A dark, solid colored skirt and a white blouse. IBM believed that the way its workforce dressed portrayed the specific image that they wanted associated with their company. Apparently, they held the belief that it’s “the clothing that makes the man.”

And this belief was just as true in the 1990s, as companies like IBM shifted from strict, conservative dress codes to less-formal attire. Casual dress in the workplace became the new trend and “Dress down Fridays” becoming a popular section in most clothing stores. Companies like IBM believe that the way one dresses helps contribute to the way one works, behaves, and acts toward others. It also contributes to the way others view the wearer. When we get dressed in the morning, don’t we think about what type of image we want to portray for that day? Don’t we pick out our clothes for the day based on more than just the weather? What does this t-shirt say about me? Should I wear a traditional tie for that meeting today? What will they think if I wear my expensive shoes to the job interview? Think for a moment about what images the following expressions convey: “Black Tie Required,” “Business Attire,” “Dressy Casual,” “No shirt, no shoes, no service.”

Indeed, the appropriate clothing is for self-dignity as well as for personal splendor, comfort, and warmth. Throughout the generations, the modesty level of our clothing has been an ongoing conversation, although the standards of modesty have no doubt changed. In Judaism, these issues of modesty fall into the category of tzniut, modesty. Tzniut is the point at which our physical appearance and our behavior intersect.

No one could argue that the terms we speak of today in debating what is modest would be foreign to those even a few generations ago. Bare-midriffs, extra-tight t-shirts, and underwear peeking out from under low-cut jeans weren’t forbidden in schools a generation ago because no child would ever think of wearing that to school. But today, all schools have a dress code of some sort. But what does it say about us as a community? Have we forgotten what is appropriate to wear?

The lesson of the clothing of the priests from this week’s Torah portion is that what we wear is actually an extension of us, whether we want that to be true or not. It is an extension of our family. It is an extension of our community. What we wear is representative of who we are, and indeed, where we come from. It speaks volumes about what we stand for and our own level of self-dignity. Styles do change. And society’s attitudes toward standards of proper attire do too. But let us not discount the importance of tzniut or the conversations that we must continue to have about what is considered modest. Let us dress for success. Let us dress for style. And most important, let us dress l’chavod ultif’aret – for dignity and splendor.