Skip to the content
For some reason NASCAR racing has never been a popular sport for the Jewish people. While kosher food and minyans (prayer groups) are common at many baseball, football and basketball games around the country, one would be hard pressed to locate the same at a NASCAR race. I think this has more to do with the culture of NASCAR racing rather than the actual sport. After all, I know a lot of Jewish people who enjoy cars and driving fast, but they probably won’t be tuning in to Sunday’s Daytona 500.

Short of Ricky Bobby (Will Ferrell) converting to Judaism in the Talladega Nights sequel, I don’t think NASCAR will ever become a popular sport for the Jews. However, there are a couple news items that could lead to more Jews embracing NASCAR racing this year.

The first is the sponsorship of a NASCAR team by Quicken Loans, the mortgage company owned by Jewish businessman and philanthropist Dan Gilbert of Detroit. In addition to owning Quicken Loans, the NBA’s Cleveland Cavaliers, and a host of other companies, Gilbert announced in late 2011 that Quicken Loans will be the primary sponsor of Ryan Newman’s No. 39 Chevrolet Impala. Gilbert isn’t the first Jewish business owner to sponsor a NASCAR car of course (Home Depot has been one of NASCAR’s largest sponsors and is owned by Bernie Marcus and Arthur Blank).

One more way that Gilbert is becoming involved with NASCAR is with a new website dedicated to the racing sport. This week, Quicken Loans announced the launch of QuickenLoansRacing.com. The site provides fans an inside look at the world of NASCAR and provides unprecedented access to the world of stock car racing. Race fans will find exclusive interviews with Ryan Newman and his Stewart-Haas Racing (SHR) teammate, three-time and reigning NASCAR Sprint Cup Series champion Tony Stewart (who won yesterday’s first Gatorade Duel), on the site. Additional content includes behind-the-scenes photos and videos from the Stewart-Haas race shop, interviews with the crew that helps get the No. 39 Chevrolet to the track each week, and more. Quicken Loans has also created a racing Facebook fan page, which can be found at facebook.com/quickenloansracing. 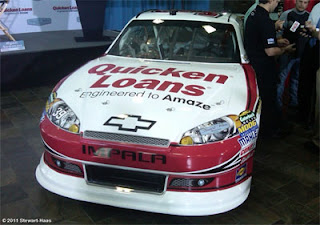 The Quicken Loans NASCAR sponsorship and new NASCAR website might not get more Jews to appreciate the racing sport, but a NASCAR car sporting the Israeli flag certainly could. According to its website, “America/Israel Racing was formed to promote awareness of and support by Americans for Israel, the only true democracy in the Middle East. We hope to educate Americans on the importance the United States’ relationship with Israel through exposure provided by one of the largest spectator sports in the world – NASCAR. With the support of like-minded individuals, AIR will spread its message of American Israeli support throughout the entire 2012 NASCAR Sprint Cup Series and beyond.” 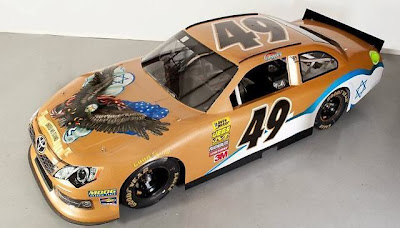 Sunday’s Daytona 500 would have been the first opportunity for NASCAR fans to see the Toyota with the painted Israeli and U.S. flags. However, the America Israel Racing team’s No. 49 Toyota driven by J.J. Yeley failed to qualify for the Daytona 500 with a last place finish in yesterday’s second Gatorade Duel in Daytona Beach.

In the Jerusalem Post, Rich Shirey, a Zionist Christian and co-founder of AIR explained, “As the only true democracy in the Middle East, we feel it is critical that the United States reaffirms its commitment to stand beside Israel. By fielding a car in the most-watched race of the year, we hope to show Israel just how many Americans feel the same way.” The Toyota racing car’s design was inspired by AIR’s mission of promoting American-Israeli support and prominently displays both the American and Israeli flags. A striking image of a bald eagle holding both nations’ flags in its claws and an olive branch in its beak is featured on the hood. 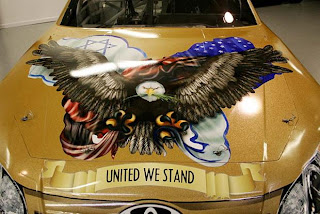 Had the American Israel Racing car qualified for the Daytona 500, its message of the importance of the American-Israel relationship would be seen by the 168,000 fans who watch the race in person and the estimated 15.6 million Americans who will tune in on television. By contrast, AIPAC’s policy conference next month will have 13,000 in attendance. There is certainly a strong possibility that the Israeli flag-adorned racing car will eventually compete in a major NASCAR race. Will it guarantee a love affair between NASCAR and the Jews? That’s unlikely, but it could help increase Jewish interest in the sport.