Skip to the content
This year’s Super Bowl Sunday will place two major Jewish philanthropists against each other. The New York Giants are co-owned by the Tisch family and the New England Patriots are owned by the Kraft family.

Joint Media News Service’s Jacob Kamaras provided the “who’s who” for both families and which Jewish organizations they all lead. In the Giants’ owners’ box you have “film and television producer Steve Tisch, son of Bob, as the team’s chairman and executive vice president. Bob’s brother, Larry, was the father of Jim — former president of the UJA Federation of New York and former board chairman of the Conference of Presidents of Major American Jewish Organizations. Jim’s wife, Merryl, chairs the board of the Metropolitan Council on Jewish Poverty.”

On the other side of the field you have the Tisch family with “owner Robert Kraft’s wife Myra—who passed away last July—served as chair of the Boston-based Combined Jewish Philanthropies’ (CJP) board of directors and was twice co-chair of CJP’s annual fundraising campaign.”

Both families are responsible for donating mega amounts of charitable gifts to major Jewish organizations, both here and in Israel. So, which Jewish owner’s team will come out victorious on Sunday night? For that we have to go to Rabbi Joshua Hammerman, who each year uses his Torah erudition to select the Super Bowl winner.

This year, the Connecticut-based Rabbi Hammerman decides to not make a Super Bowl prediction because “this year’s matchup hits too close to home – and, more to the point, my prediction before Super Bowl 42 (of a Pats win) did not work out too well. So, because I prefer not to jinx my team, no prediction this year.” He does use the Torah narrative to provide some background on the game:

Just before Super Bowl 42, you recall, the Patriots were busted for spying. In my prediction before that Super Bowl, which I am not repeating here, I noted that in the book of Numbers when the Israelite spies confronted “giants” as the scouted out the land, they reported back that they felt “like grasshoppers.” I noted that anyone who has ever been to Boston knows that high above that home of the original Patriots, Faneuil Hall, there sits a weathervane in the shape of, you guessed it, a grasshopper!

I also noted (in that prediction, which I’m not repeating here) that the Patriots wandered for just over 40 years before winning the first championship in 2002. So they had already served their time for the sin of the spies, which, as you recall from Numbers, was 40 years. For 40 years, the Patriotic spies were never able to stand up to the Giants…or the Raiders or Steelers or Dolphins, for that matter. But no more. First they sacrificed the Rams in Super Bowl 36, then they pillaged the Panthers and flew on wings of Eagles. Now, coached by a former Giant, they have become giants – in their own eyes, and the eyes of the other teams in the league.

I then noted (but am not repeating here) that Giants are called both Nefilim and Anakim in the Torah. The Nefilim were mythic humanoids that filled the earth before the flood, much like the Titans of Greek mythology (a Giant-Titan Super Bowl would have been a doozy), while the Anakim were the ones who petrified the Israelite spies. There is one other giant of note in the Bible: Goliath. But it isn’t just Goliath who bit the dust, folks. When Rashi tried to explain the term Nifilim, he related it to the Hebrew word “nafal,” “to fall.” As Rashi (he was so good at predicting games that they called him “Rashi the Greek”) understood it, the Giants fell.

Based on Rashi, I concluded then that the Giants would fall. What I didn’t account for was the heroism of an unexpected David, whose last name is Tyree, who also happened to be a Giant. That was then, this is now. I can’t repeat my prior prediction, lest I tempt fate and repeat the result. 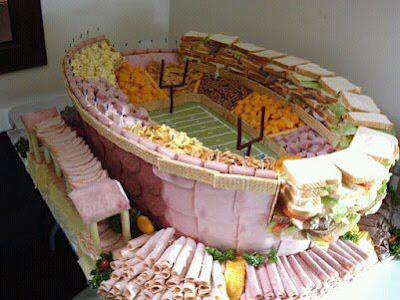 Many people enjoy Super Bowl Sunday, but not for the actual football match up. It is after all the second biggest eating day of year after Thanksgiving. So many people look forward to the food. I found this very non-kosher, but very cool looking Super Bowl food creation. It could very easily be adapted to a kosher creation by using only kosher deli meats and getting rid of the cheese and cheese snacks. And while we’re at it, how about substituting some rye bread and onion rolls for that white bread? I know one former NFL player who would enjoy this treif tray. Former New England Patriots punter Josh Miller, who is Jewish, played for the Patriots in Super Bowl XXXIX and was recently quoted as saying that he was craving a ham sandwich with less than a minute to play in that game, which the Patriots won 24-21 over the Philadelphia Eagles.

Finally, I feel inclined to give some credit to Yeshiva University for offering a learning opportunity during halftime of the Super Bowl. The YU Torah Halftime Show incorporates Torah into the Super Bowl experience. It is a series of three 8 minute presentations on “Torah and Sports” topics, featuring leading faculty members Rabbi Ely Allen, Rabbi Lawrence Hajioff and Dr. Yitzchak Schechter. The Torah learning show will be available for viewing on YU’s dedicated website on Sunday. Here’s the promo video for the YU Torah Halftime Show:

(c) Rabbi Jason Miller | http://blog.rabbijason.com | Twitter: @RabbiJason | facebook.com/rabbijasonmiller
The Tim Tebow craze is now hotter than ever as the Denver Broncos’ quarterback is shepherding (sorry!) his team into the playoffs. In November I wrote about about how Tim Tebow and his kneeling in public prayer (“Tebowing”) was heating up the discussion of prayer in sports. I had no idea that the Tebowing craze would continue to be such a hot topic this late into the NFL season. Whether God is on his side or he’s just a phenomenal athlete in crunch situations, Tebow has certainly become the topic on everyone’s mind. 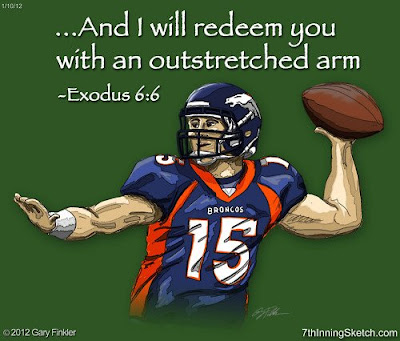 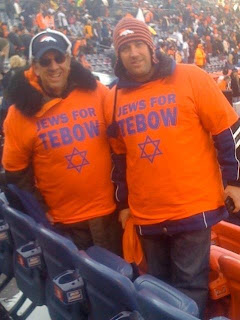 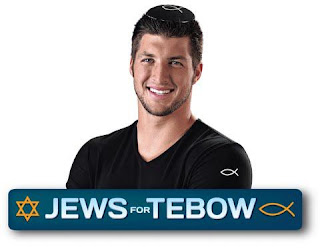