Skip to the content
Today is the 13th day of the Omer, the period of forty-nine days between the Jewish holidays of Passover and Shavuot.

The Jewish people are commanded to count these forty-nine days which commemorate the day on which an omer (unit of measurement) of barley was offered in the Temple until the day before an offering of wheat was brought to the Temple on the festival Shavuot. We begin this counting on the second day of Passover and each night announce what day of the Omer it is.

Omer counting devices and special Omer calendars have long been relied upon to help individuals remember the correct count, but in the Digital Age there are websites and apps and text message reminders to help keep the counting correct. 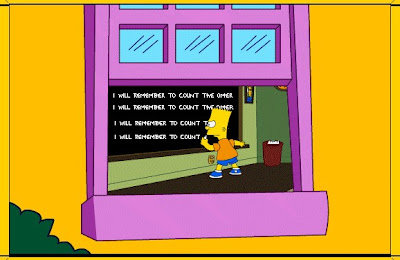 There are also some fun tools to help us count the Omer. For the past 13 years the Homer Calendar has been a fun destination on the Web for Jewish Omer counters who are also fans of The Simpsons. The website, which has had about 225,000 visits, cites Howard Cooper with the idea of an Omer calendar that pays homage to The Simpsons and Homer Simpson, the patriarchal head of the cartoon family. In addition to providing an easy-to-use omer calendar, the site is also a resource for Simpsons fans who want to learn more about the many Jewish references on the show. Brian Rosman, the Homer Calendar’s administrator, also tweets the daily Omer count @CountTheHomer on Twitter.

An introduction to the website explains that it is now in its 13th year, which it calls its “Bart Mitzvah”. The site also mentions that, “When we started, we got a ‘cease and desist’ order from Fox, claiming a copyright violation. Interestingly, the letter was dated on Shavuot. We wrote back, claiming a ‘fair use,’ and haven’t heard anything since.” 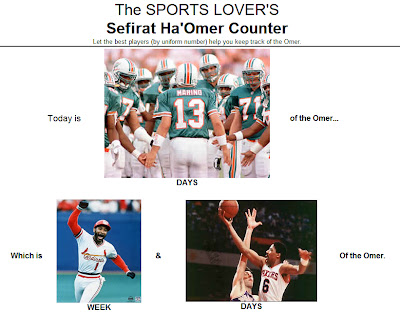 Seth and Isaac Galena over at Bangitout.com have come up with two fun ways to count the Omer. With a nod to pop culture, the brothers have created the Movie Lover’s Omer Counter and the Sports Lover’s Omer Counter. The movie counter uses movies with numbers in their titles to remind users which day of the count it is, while the sports counter relies on athlete’s uniform numbers. Perhaps next year they’ll create an omer counter for NASCAR fans with car digits.

There are several mobile apps that help remind users to count the Omer and provide the correct day of the counting. Rusty Brick first released its Counting the Omer app (Free) back in 2009 and it is still an industry leader. The app provides an Omer calendar and includes the blessings and spiritual information pertaining to each day of the period. The free version of the app does not provide a daily reminder to count, but the 99-cent version does. Moshe Berman’s Ultimate Omer 2 ($2.99) not only reminds you to count the Omer, but it also lets you keep track of the days you remembered to count. The app also plays the phone’s default alarm sound to remind you to count. 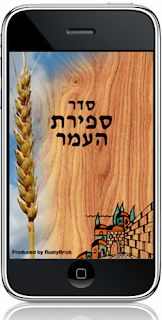 Mosaica Press released a new app ($4.99) that is based on Rabbi Yaakov Haber’s Spiritual Grow book. The app, which is available in iPhone and iPad formats, helps count the Omer and also provides daily insights with a Kabbalistic flavor. An example of the Jewish spiritual wisdom the app provides is: “Day 10: Make sure that today you not only give people the benefit of the doubt, but even when it seems that they are definitely in the wrong, try to find some way of justifying their actions. Try to see their point of view…Find two things in your life that conflict and make them harmonize.” Some of the app’s features include the proper blessing to recite before counting each night, automatic adjustment for time zone and location, and social network integration to share on Facebook and Twitter.

In addition to the mobile apps, there are other ways that technology is playing a part in the Counting of the Omer. Josh Fleet, one of the editors of the Huffington Post’s religion vertical, came up with the idea of offering a liveblog on the HuffPost Religion site during the Omer period this year. The Omer Liveblog features blogs, prayers, art and reflections for all 49 days of spiritual reflection during the Omer. 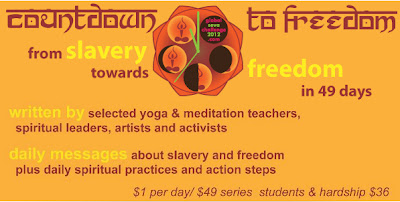 Rabbi Heather Altman turned to Google Docs to help assemble other rabbis who would contribute their wisdom to a Counting the Omer project she conceived of to raise money for the Global Seva Challenge. Rabbi Altman launched the seven week email subscription series called Countdown to Freedom which offers a different spiritual insight each day via a subscription-based Constant Contact newsletter. Subscription costs of the daily Omer reflection newsletter raises funds in the fight against human trafficking. Her 49-day project also raises awareness of the global problem of human trafficking, which is now a $32 billion business.

A generation ago, Jewish people simply counted up the days of the Omer until Shavuot arrived. The more spiritually inclined might have delved into the mystical traditions of the counting period. However, no one could have imagined that technology would create so many new aspects to this seven week observance. New technology has certainly opened the door to new ritual.

(c) Rabbi Jason Miller | http://blog.rabbijason.com | Twitter: @RabbiJason | facebook.com/rabbijasonmiller
This is my contribution to the HuffPost Religion’s Omer Liveblog, which features blogs, prayers, art and reflections for all 49 days of spiritual reflection between Passover and Shavuot: 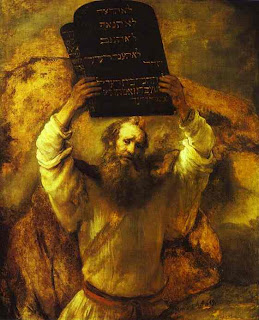