Skip to the content
These words are displayed over the ark containing the Torah scrolls in many synagogues: Da Lifnei Mi Atah Omed (“Know Before Whom You Stand”). Thousands of Jewish people see this reminder in front of them while sitting in synagogue. Of course, the phrase reminds us to keep in mind that we stand before God while we pray in synagogue and it calls to mind the scene in Exodus when Moses appeared before God at the Burning Bush. 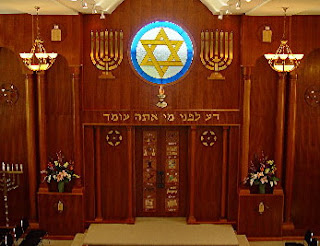 I thought of these words yesterday while reading an article in the New York Times about the recent armed robbery of Supreme Court Justice Stephen Breyer at his Caribbean vacation home. The article goes on to discuss the anonymity that the Supreme Court justices enjoy and the relative lack of security provided to them. The article concludes with a true story that demonstrates just how anonymous these justices are. “One day, Justice [John Paul] Stevens was walking outside the court when tourists stopped him. They wanted to know if he would mind moving out of the way so they could take a good photograph of the Supreme Court.”

These tourists had no idea that they could have enjoyed the memorable experience of meeting one of the nine justices on the U.S. Supreme Court, but instead they were left with a photograph of a building in which this justice sits and makes history while ruling on the most important legal cases of our time. I couldn’t help but laugh while reading this story. I recalled the famous Yehuda Amichai poem, “Tourists”:

Once I sat on the steps by a gate at David’s Tower, I placed my two heavy baskets at my side. A group of tourists was standing around their guide and I became their target marker. “You see that man with the baskets? Just right of his head there’s an arch from the Roman period. Just right of his head.” “But he’s moving, he’s moving!” I said to myself: redemption will come only if their guide tells them, “You see that arch from the Roman period? It’s not important: but next to it, left and down a bit, there sits a man who’s bought fruit and vegetables for his family.”

What a shame that those tourists in our nation’s capital didn’t recognize Justice Stephens. Too often we don’t take the time to recognize the important people in front of us and what they have to offer. Here’s another true story that shows how easy it is to ignore the wonder right in front of our noses:

On a cold January morning in 2007, a man sat at a Metro station in Washington DC and started to play the violin. He played six Bach pieces for about 45 minutes. During that time, since it was rush hour, it was calculated that thousands of people went through the station, most of them commuting to work. The story goes that after three minutes, a middle aged man finally noticed the musician but he only slowed down to listen for a few seconds. Some people stopped to toss some money in his collection till, but most simply ignored the violinist. The individual who paid the most attention was a 3-year-old boy, but his mother hurried him along. In all he collected $32, but no one really stopped to enjoy his music. When he finished, no one applauded.

Turns out that this wasn’t just any violinist playing on any violin. This wasn’t a beggar looking to make some quick lunch money either. The violinist was Joshua Bell, who only days earlier had sold out at a Boston theatre where the average ticket was $100. In the subway, Bell was playing one of the most intricate pieces ever written with a violin worth $3.5 million. The Washington Post conducted this as part of a social experiment about perception, taste and priorities of people. (The video of Joshua Bell playing violin in the subway station is below.)

Why don’t we recognize people’s gifts when they are right in front of us? We have a reminder that we’re standing before God when we pray in a synagogue, but perhaps it would be helpful to have this reminder when we stand before other human beings. In Pirkei Avot, Ben Zoma teaches, “Who is wise? He who learns from all people.”

I have found that many Jewish people are hesitant to learn from other Jews who are of different denominations than their own. We can all learn from those around us and oftentimes, we are forced to think in new and different ways when we keep an open mind to those who think differently than us. While the teacher in front of you may not look like you or dress like you, I encourage you to remember before whom you stand. It is a child of God who, in the words of the sage Ben Zoma, may make you wise.

One of the gifts of the Internet is that we have much more access to the wisdom of teachers from around the world. Every teacher who offers his or her Torah via the Internet is a “rabbi without borders.” It is so important that we are all open to learning from others. We just never know when that human being in front of us will be a Supreme Court justice, a world renown musician, or a great teacher who will forever change our life.