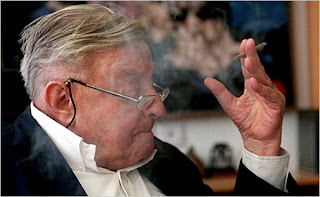 I’ve met a few big city mayors in my life (Detroit’s Dennis Archer, Ed Koch of NYC, and Michael Coleman of Columbus), but no one will ever surpass Jerusalem’s Mayor Teddy Kollek, may his memory be for a blessing) in popularity, sincerity, or menschlichkeit.

In July 1996, I was walking in front of Jerusalem’s King David Hotel with my dad and his friend Lazer Dorfman. Lazer pointed to the short, old man standing in front of a car with the car alarm blaring and said, “That’s Teddy Kollek, the old mayor of Jerusalem.” We went up to say hi and he shook our hands explaining that his driver was inside and he accidentally set off the car alarm. I took the keys and quickly turned off the alarm. Mayor Teddy was very thankful for our help and we talked until hisdriver returned.

Whenever I tell this story to a native Israeli, their face lights up and they tell their own story of what a nice guy and great mayor Teddy Kollek was. He will sorely be missed.

“Mr. and Mrs. Bernanke, Your son Ben Shalom has just been nominated as the new Chairman of the United States of America’s Federal Reserve, a position some call the most powerful in the world. Where are you going?”

“Um, we thought we’d just go the shul for our adult ed class.”

That’s right, not to Disneyland or either to D.C. to see the Senate approve their son Ben Shalom Bernanke‘s nomination to replace Alan Greenspan as the Fed Chairman.

The Los Angeles times reports that “Bernanke’s parents are staying home in North Carolina because their son has told them there’s nothing to see. They don’t plan on being glued to the TV either. ‘We have a class at the synagogue,’ Edna Bernanke said. ‘We’ll put a tape in the VCR and see if we caught something when we come home.'”

So we learn three important things about the new Fed Chairman’s parents from Mrs. Bernanke’s quote:

A) She wanted her son to become a doctor;
B) Either her rabbi’s a good teacher or the shul serves good coffee at evening classes; and,
C) They don’t have Tivo.

Well, good luck to Ben Shalom Bernanke in his new position. The world (perhaps excluding Mom and Dad) will be watching.