Last weekend at a wedding, I was approached by a lovely couple who were very excited to see me after many years. It took me a moment to recall they were Brian’s parents, but when I did, my excitement matched theirs. Brian was a student in the first class of Hebrew School I ever taught. I got my start as a Jewish educator as a young 18-year-old college freshman in East Lansing, Michigan. I taught the same group of students for three years in a row; from fourth grade through sixth grade.

After Brian finished sixth grade, his parents hired me as a private tutor to continue teaching him Hebrew and to train him for his upcoming bar mitzvah. For a year, I visited Brian at his parent’s home on a weekly basis where we went over his Torah portion, haftorah (selection from the Prophets), and worked on his bar mitzvah speech. Some thirteen years later, I still remember learning about the Nazirite Samson with Brian. I didn’t merely teach him to recite his Torah reading and haftorah; rather, we studied the biblical text with the commentary so that he understood what he was chanting to the congregation.

Brian’s parents shared with me how meaningful that experience had been for their son. As they walked away, I found myself feeling nostalgic about the one-on-one Jewish education I offered Brian, and also about the article I recently read in the New York Jewish Week about private Jewish tutoring.

The NY Jewish Week cover story explained something I quickly discovered upon moving to Manhattan for rabbinical school over a decade ago. Many families choose to hire private tutors in lieu of Hebrew School. Writer Julie Wiener explains:

As seemingly growing numbers of families in New York and other major metropolitan areas eschew Hebrew schools for the convenience and intimacy of private tutors, many in the organized Jewish world — particularly those active in synagogues — worry that tutoring’s individualized approach, part of a larger trend in modern American culture, poses a threat not just to synagogues, but to the very ideals of Jewish community.

The only thing that surprised me about Wiener’s article was that it took this long for the topic to make the headlines. At the Jewish Theological Seminary in the late 90’s, I had quite a side-business with the various private tutoring jobs I amassed. There was an e-mail list sponsored by the Rabbinical School Student Organization (RSSO). Local Manhattan families would post blurbs about their need for a private tutor for their son or daughter who was too busy to attend Hebrew school at the temple or synagogue, had a learning disability that required an individualized approach, didn’t care for the Hebrew School teacher, or didn’t get along with the other kids in Hebrew School. In some cases, the parents didn’t want to join a temple or synagogue, preferring a do-it-yourself approach instead. In other cases, they didn’t want their child to commit to the several hours a week of Hebrew School that was required to become a bar or bat mitzvah because of extracurricular obligations like hockey, soccer, dance, theater, or other tutoring time.

The compensation was great for full-time graduate students in New York City. In most cases, I was paid $80/hour, but tutoring a group of students (i.e., three) was upwards of $125/hour. Many of the jobs were advertised on the e-mail list, but the best tutoring jobs were passed down from graduating rabbinical students to younger rabbinical students. 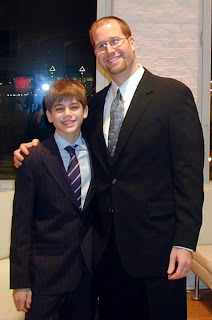 When my friend and next-door neighbor Mickey Stanger graduated from the Seminary, I inherited several of his students. There was the young boy with ADHD who I tutored weekly for four years. His parents didn’t want to renew their membership at the synagogue and the boy’s learning disability wasn’t handled appropriately by the teachers. In the first couple years, I taught him Hebrew and basic information about Jewish holidays and customs. When he turned twelve, we began to prepare for his bar mitzvah — an intimate Havdallah service that I created specifically for him (do-it-yourself Judaism).

Those four years created a wonderful relationship not only with the young boy, but also with his parents. He never would have learned as much in a structured classroom, but I was able to personalize the lessons to meet his learning needs. Of course, it could be argued that while this family got what they wanted — a personalized bar mitzvah ceremony that perfectly fitted their son’s needs — they did not gain a closer relationship to a synagogue community or a rabbi as they would have with the traditional Hebrew School and bar mitzvah path.

There was also the group of three rowdy boys I tutored weekly around the kitchen table. They would have been thrown out of their Hebrew School classroom each week for their disruptive behavior, but I was able to reach them through various techniques that would have been impossible for a teacher in a classroom. I also tutored a young girl in Hebrew reading. Sitting in her parents’ multi-million dollar brownstone, I became the family’s rabbi often finding myself counseling the parents through their bitter divorce. While I usually found myself walking into vast, beautiful Upper East Side apartments to a team of nannies, maids, and other tutors, it was not just the wealthy who engaged tutors. Some families, as the NY Jewish Week article explains, are either allergic to shul membership or found it was more cost effective to forgo Hebrew School tuition for private tutoring.

JTS Professor Jack Wertheimer is quoted in the NY Jewish Week article. He “wonders how well private programs can socialize young Jews to feel part of a congregation. One of the great advantages of Jewish children being educated in schools is that they are exposed to different types of Jewish role models. They see the rabbi, they see their teachers, they see other adults engaged in Jewish living. The private route limits the exposure of young people.”

In the article, Rabbi Laurie Phillips, director of education at Congregation Habonim, likens Jewish studies tutoring to private sports lessons. “You can learn to play soccer with a tutor, but it’s a different experience if you’re learning one-on-one versus being part of a soccer team. You’ll know how to play, but won’t know how to be part of a team.” I think that’s a fair assessment when it comes to tutoring in place of Hebrew School. Unfortunately, because of time constraints there aren’t many families who are supplementing Hebrew School with tutors. It’s usually an all-or-nothing proposition.

Along with the argument that these children are missing out on the community experience when they are only privately tutored, there is also the case of synagogue membership hurting. Many families join congregations so that their children can attend Hebrew School and become bar or bat mitzvah. When Jewish families in the metropolitan areas opt for private tutoring instead of Hebrew School, it also means they’re going the do-it-yourself Judaism route as well and forsaking synagogue membership. That clearly hurts the synagogues.

Nevertheless, it appears that the private Jewish tutoring business is thriving. Some educators have incorporated and run large tutoring businesses for groups and individuals who opt out of the Hebrew School track. Rabbi Reuben Modek’s website for his Hebrew Learning Circles program offers private bar and bat mitzvah preparation, as well as cultural and religious education. As if that alone won’t infuriate local pulpit rabbis, Modek also advertises that he’ll officiate at life-cycle events taking full advantage of the craving for do-it-yourself Judaism.

It’s only a matter of time before this coastal and big city trend of private tutoring for those who opt out of Hebrew School makes its way to the “heartland” Jewish communities. Already, in the Metro Detroit area, one former synagogue bar/bat mitzvah tutor has begun advertising in the Detroit Jewish News that he can be hired for private tutoring for those not wishing to attend Hebrew School. Yes, this hurts synagogues, but ultimately let’s hope it will make Hebrew Schools improve. Competition often does just that.