Skip to the content
I don’t recall “The Jewish Vote” ever being such a widely discussed topic during a presidential election in my lifetime. Not only is there speculation about how American Jews will vote today, but opinion polling of Israelis is making world news as well.

A Times of Israel survey of 400 adult Israelis showed they prefer GOP candidate Mitt Romney (45%) to President Barack Obama (29%) for president. And according to “exit polling” of Israeli expats who voted absentee in the U.S. elections (up over 400% this election) conducted by ivoteisrael.org, a full 85% reportedly voted for Romney. President Obama only received 14.3%, which is 40% lower than the vote he received from Israel in 2008 thereby making Israel even more Republican-leaning than Utah, Oklahoma or Wyoming. 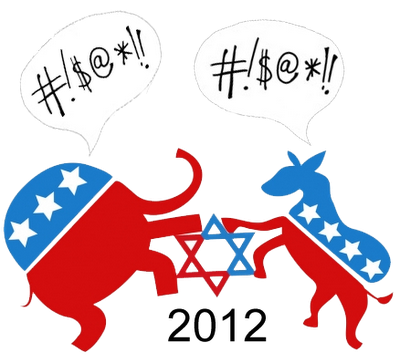 The JTA reports that Jewish votes in swing states are stirring emotions and that Jewish votes in these states are stressing themes of Jewish vulnerability and threatened Jewish values. “In the final days of what has been a close and bitterly contested election, it’s not so much that nothing is sacred in the fight for the Jewish vote. It’s that little that is sacred has not been put to use.” The article uses the hotly contested senate race in Ohio between Jewish Republican Josh Mandel (Ohio treasurer and a Marine vet) and incumbent Sherrod Brown, a Democrat. Members of the prominent Ratner family, who are related to Mandel by marriage, wrote a scathing letter in the Cleveland Jewish News attacking their cousin’s husband for his conservative views on same-sex marriage and gays in the military.

This election cycle has been an ugly one when it comes to the Jewish community. The lack of civility is something that I hope ends as soon as the results are in so that we can begin the healing process.

Rather than get into the whole heated political debate over which candidate for president will be better for Israel’s security or for American Jews’ social issues, I thought it would be nice to take a look at the Jewish value of voting and civic engagement.

The responsibility of choosing leaders dates all the way back to the Torah. In fact, it was a non-Israelite leader who first gave the recommendation of setting up a system of representatives who would render judgement based on the Law. In Exodus 18, Moses’ father-in-law Yitro advises, “Look for able men from all the people, men who fear God, who are trustworthy and hate a bribe, and place such men over the people as chiefs of thousands, of hundreds, of fifties, and of tens.”

In Deuteronomy 1:13 it says, “Choose for your tribes wise, understanding, and experienced men, and I will appoint them as your heads.” And later in Deuteronomy we learn the commandment to set up a one leader system. “When you come to the land that the Lord your God is giving you, and you possess it and dwell in it and then say, ‘I will set a king over me, like all the nations that are around me,’ you may indeed set a king over you whom the Lord your God will choose. One from among your brothers you shall set as king over you. You may not put a foreigner over you, who is not your brother.”

As I walk into the voting booth on Election Day I pause for a moment and study two Jewish texts. The first comes from a teaching in Pirkei Avot (the Ethics of the Sages). “Hillel taught: Do not separate yourself from the public.” Hillel reminds me that the civic act of voting is a value that I must uphold and not take for granted. When I cast my ballot I am declaring that I am a vocal part of the community.

The second text comes from Maimonides and reminds me of the importance of being free to choose. In his Laws of Repentance, Maimonides taught that making a choice is a central principle and a pillar of the Jewish faith. “As the Torah states: ‘Behold I have given you this day a choice between good and life, death and evil.’ It is also written in the Torah: ‘Behold, I have set before you today the blessing and the curse.’ In other words, the choice is in your hands. Any one of the deeds of men which a person desires to do, he may, whether good or evil… The Holy One, blessed be He, does not force people or decree upon them to do good or evil – rather, everything is left to their own choice.”

The responsibility to vote is part of what makes me so proud and appreciative to live in a democracy. I feel blessed to walk into the polling place and cast my ballot. Not only am I letting my voice be heard, I’m also expressing my right to choose and my responsibility as a member of the public community.