Skip to the content
In this week’s Torah portion, Parshat Lech Lecha, we are told of the divine command given to Abraham to leave the land and travel to a new land which God will show him. We are then told about Abraham’s financial status. V’Avram Kaved Meod. And Abram was very rich. Rich in cattle, in silver, and in gold. There is much to be learned from this word kaved, or rich. The word most often used for rich or wealthy in the Torah is ashir. So we must be curious about the choice to use kaved here.

In modern Hebrew, we use the word kaved to mean heavy, as in that sofa is too kaved for me to move. It can also mean a burden. The medieval commentator Rashi mentions this meaning in his commentary on the verse, and adds another meaning of kaved that many of us are familiar with. From the fifth commandment of the Ten Commandments, kabed et avicha v’et imecha – that we should honor our parents – we understand kaved to mean honor or respect. Similarly, from the same root of course is the word for an honor that is given out in synagogue, a kavod. Finally, the word kaved also means liver, the heaviest part of our body. So to review, Abraham, we learn in our parsha this morning is wealthy. We know this from the Hebrew word kaved, which is an unusual choice for wealthy, and also according to the dictionary connotes honor, respect, dignity, seriousness, heaviness, burdensome, taxing, laborious, and liver.

Here it is used to mean that Abraham was weighted down with many possessions because of his wealth. But in the very next verse, we learn that Abraham traveled from the Negev to Beit El “in stages,” l’ma-asav. Rashi tells us that the use of this word means that upon Abraham’s return from Egypt, he took the same route back staying in the same places he had lodged on his way down to Egypt. Rashi points out that while Abraham is wealthier now, he has retained his humility and doesn’t choose to stay in nicer places. Abraham, our patriarch, was not altered by his accumulation of wealth. Recognizing the tendency to be burdened by material wealth, Abraham managed to maintain his kavod when he became kaved. This is not always the case.

As we know from the recent financial meltdown, power and wealth can be burdensome and challenging. In our society, such a vast possession of wealth requires much responsibility and integrity. It catapults people into the public eye, living life in a fishbowl, having every business decision scrutinized, every investment maneuver questioned. There are many advantages to a life of wealth, but it must be done while maintaining kavod – honor.

I hear it was garish display of rock ‘n’ roll idol worship for which the famously irascible CEO of DHB Industries, a Westbury-based manufacturer of bulletproof vests, sent his company jet to retrieve Aerosmith’s Steven Tyler and Joe Perry from their Saturday gig in Pittsburgh. 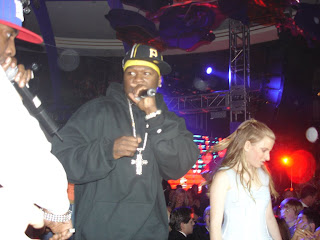 I’m also told that in honor of Aerosmith (and the $2 million fee I hear he paid for their appearance), the 50-year-old Brooks changed from a black-leather, metal-studded suit – accessorized with biker-chic necklace chains and diamonds from Chrome Hearts jewelers – into a hot-pink suede version of the same lovely outfit.

The party cost an estimated $10 million, including the price of corporate jets to ferry the performers to and from. Also on the bill were The Eagles’ Don Henley and Joe Walsh performing with Fleetwood Mac’s Stevie Nicks; DJ AM (Nicole Richie’s fiance); rap diva Ciara and, sadly perhaps (except that he received an estimated $250,000 for the job), Kenny G blowing on his soprano sax as more than 300 guests strolled and chatted into their pre-dinner cocktails.

“Hey, that guy looks like Kenny G,” a disbelieving grownup was overheard remarking – though the 150 kids in attendance seemed more impressed by their $1,000 gift bags, complete with digital cameras and the latest video iPod.

For his estimated $500,000, I hear that 50 Cent performed only four or five songs – and badly – though he did manage to work in the lyric, “Go shorty, it’s your bat miztvah, we gonna party like it’s your bat mitzvah.”

At one point, I’m told, one of Fitty’s beefy bodyguards blocked shots of his boss performing and batted down the kids’ cameras, shouting “No pictures! No pictures!” – even preventing Brooks’ personal videographers and photographers from capturing 50 Cent’s bat-miztvah moment.

“Fitty and his posse smelled like an open bottle of Hennessy,” a witness told told me, adding that when the departing rapper prepared to enter his limo in the loading dock, a naked woman was spotted inside.

I’m told that Petty’s performance – on acoustic guitar – was fabulous, as was the 45-minute set by Perry and Tyler, who was virtuosic on drums when they took the stage at 2:45 a.m. Sunday.

Henley, I hear, was grumpy at the realization that he’d agreed to play a kids’ party.

I’m told that at one point Brooks leapt on the stage with Tyler and Perry, who responded with good grace when their paymaster demanded that his teenage nephew be permitted to sit in on drums. At another point, I’m told, Tyler theatrically wiped sweat off Brooks’ forehead – and then dried his hand with a flourish.

Yesterday, Brooks disputed many details provided to me by Lowdown spies at the affair and by other informed sources, scrawling on a fax to me: “All dollar figures vastly exaggerated.”

He added: “This was a private event and we do not wish to comment on details of the party.”