So, we’re right in the middle of the Jewish holiday of Sukkot. And if you’re like most people, when you hear the word “Sukkot” you’re thinking of shaking lulavs (palm branches), smelling the etrog (lemon-impersonating fruit), and eating in the sukkah (temporary hut). But there’s this really cool ritual on the holiday that many people don’t know about… it’s called “Ushpizin.”

Now, some people have heard of “Ushpizin” because of a popular, low-budget film by the same name that came out a few years ago about a Hasidic man who spends his rent money on an oversized and overpriced etrog. (I hear James Cameron’s directing the sequel in 3-D.)

If you’ve never heard of the custom of “Ushpizin,” it’s sort of like inviting dead relatives to a dinner party. Ushpizin is derived from the Latin hospes meaning guests (like hospitality). According to Kabbalah, there are seven ancestral guests we invite into our sukkah: Abraham, Isaac, Jacob, Moses, Aaron, Joseph, and David. Today, some invite the famous women from Jewish history as well.

Inviting the same imaginary folks into the sukkah year after year gets a little, um, boring, so I was thinking it’s time to shake things up a bit (we shake the lulav, so why not this Ushpizin tradition too?!). Here’s what I’m thinking: One night, eight celebrity guests, my sukkah… let the video cameras roll. Now that’s what I call “Reality TV.”

Remember, the sukkah’s not a very big space so it’s going to get crowded. Here’s who’s on my celebrity guest list this year: 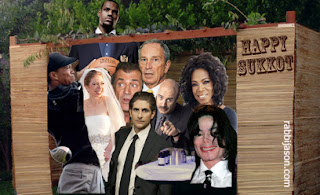 1) Mayor Michael Bloomberg – He’s just so Jewy and the gazillionaire probably wouldn’t have a problem picking up the tab for the food. Plus, his take on the whole Islamic center and mosque by Ground Zero controversy makes for interesting dinner conversation.

2) Chelsea Clinton – She just married a Yid, so why shouldn’t she have a nice meal in my sukkah during her first Sukkot.

3) Mel Gibson – After spending a nice evening under the stars with some yummy Jew food, even this guy might warm up to the Chosen People. Plus my wife’s matzah ball soup will help him relax a bit.

4) Tiger Woods – I mean, where else is he getting a home cooked meal these days? And, I’d love to see him hit an etrog with his 9-iron.

5) Michael Jackson – Hey, if we can invite King David into our sukkah, why can’t we invite the King of Pop?

6) Michael Imperioli – The Soprano’s star has been in “The D” filming the new cop drama “Detroit 1-8-7” so I figure he can provide some protection for the other celebs in the sukkah.

7) LeBron James – He’s upset with Dan Gilbert’s irate letter after he left Cleveland for Miami, so a little love from the Jews would help. But I am a little concerned about the 6 foot 8 NBA star fitting in my sukkah.

8) Oprah and Dr. Phil – With all these celebs, we’re going to need someone to moderate and someone to provide some therapy and I guess these two are a package deal anyway.

Oh, and of course my grandma’s invited. What’s a holiday meal without Bubbie? I just hope Mel Gibson watches what he says.

If you could invite eight celebrities for a night in your sukkah, who’d be on your guest list? Leave your list in the comments section below.