As our society becomes even more dependent on technology, we will have to continue adapting to the technology innovations that continue to amaze us. The constant advances in everything from mobile gadgets to our household appliances will force us to change the way we currently do everyday tasks. If you need help figuring out how to use any of the new technology, just ask your kids.

Joking aside, children adapt quickest to new technology because they don’t really have to adapt much. Swiping on an iPad screen, controlling the Xbox 360 Kinect videogame console through virtual reality, or starting the family’s washing machine from a mobile app seem to come naturally for children. In the same way that parents joked in the 1980s that they needed their children to program the VCR, today’s parents marvel at how comfortable their children are with new technology. 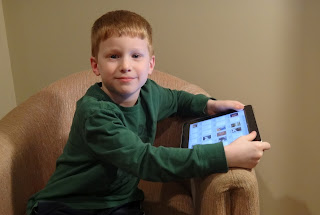 Children as young as four years old are using the Internet, mobile devices, and gaming consoles. In some cases this is a good thing, but there are certain risk factors that parents should be aware of. While technology can be used for positive educational purposes, there are also serious physical and psychological concerns.

Many parents report that letting their children use tablet computers like the iPad can be very helpful when waiting at the doctor’s office, on long car rides, and before the meal arrives at restaurants. There are also advantages to having children do their homework on the iPad. Julie Feldman of Farmington Hills, Michigan explains that her daughter Emily (a 4th grader at Hillel Day School of Metropolitan Detroit) is excited to come home and finish her advanced math homework on the iPad using the application Wowzers. Feldman, a registered dietician, also sees advantages in technology for children concerned about their nutrition. “My young clients are able to track their daily food intake with an app making it much easier to monitor what they eat.”

There are, however, concerns that some children are spending too much time in front of a digital screen. When children spend too many hours watching television, playing video games, surfing the Web, and using a tablet, they are likely not getting enough exercise or face-to-face social interaction. Dr. Daniel Klein, a children’s psychologist in Metro Detroit, says he sees many young patients who are spending too much time using technology by themselves and not enough time playing outside and interacting with their peers. He works with parents and provides guidance to help monitor their children’s computer and gaming activities. There are also fears that children will see things in video games or online that will have negative effects on their behavior and can lead to anxiety disorders, violent behavior, or hyperactivity.

Feldman believes that parents should determine what technology they allow their children to use based on the child’s maturity level. She gave her daughter a cell phone when she was 8-years-old, but understands that this might be too young for other children. “It’s very dependent on the child,” she says. “My daughter spends many hours at dance classes and needs to be able to communicate with us. Having a cell phone and being able to text us is anxiety reducing for her.” She also has become more cautious about her 3 ½-year-old son’s video gaming activity as she has noticed that he is acting out violent scenes and shooting with pretend guns after playing some realistic video games.

All parents should be aware of their children’s activity online and put monitoring software in place to ensure safe experiences. If a child is using a computer, parents should ensure that adult content does not come up in search results. Google and other popular search engines on the Web have SafeSearch features to filter adult content from search results. Violent scenes can also be avoided with such applications as NetNanny, which provides Internet controls.

In addition to psychological and emotional concerns, there are also physical dangers when children use technology. Dr. Daniel Rontal, an ENT at the Rontal-Akervall Clinic, notes that with the increased popularity of portable music devices among children comes an increased health risk to children’s ears. “Some children don’t realize that something is broken on their ear buds and they scratch their inner ears,” he cautions. “There is also the danger of noise induced hearing loss and that is something that isn’t even realized until years later. It won’t show up for 15-20 years, but we’re seeing more people with early hearing loss in their mid 30’s because of listening to music which is generally being played louder than it was in the 80s and 90s.”

“Kids in general feel that they’re bullet proof,” Rontal adds. “The white iPod ear buds just sit in the ear and those are okay, but the ones that go into the ear canal, called sound isolating headphones, can definitely cause infection and scratch the ear.”

Kidz Gear offers wired headphones for children designed specifically for the Apple iPod, iPhone and iPad. The Kidz Gear headphones feature unique KidzControl Volume Limiting Technology that provides a safe listening experience while helping to protect children’s hearing. This technology delivers a safe volume limited listening experience for children that is always on and limits the volume levels to 80dB and 90dB.

New technology helps us be more productive and improves our lives, but we have to learn to use it safely and in healthy ways. So too, as adults, we must be responsible and monitor the way our children utilize technology. In some cases, technology seems to be make things worse. For example, overuse of computers and mobile devices can curtail important interpersonal communication and can hinder children from developing the skills necessary to deal with others in real life.

There are real benefits to children using technology as well. Reports abound that demonstrate how technology is bolstering children’s learning experiences and complementing the education they receive in school. Some technology is even making it easier for children with developmental disabilities. The bottom line is that, like anything, there are positive and negative implications to the latest, greatest technology innovations. There are risks to children using technology without the proper supervision and moderation. The best thing that parents can do is become well trained in the technology their children are using so that they can monitor it best. That will ensure a positive, safe, and healthy technology experience for children.