The other day I had the chance to listen to Senator Barack Obama on a conference call for American rabbis. The most impressive part of the phone call was not the Democratic Presidential nominee’s ten minute talk. Rather, it was a rabbi who spoke on the call before Obama. Rabbi Elliot Dorff (right) of the American Jewish University in Los Angeles spoke beautifully and powerfully about his political views. 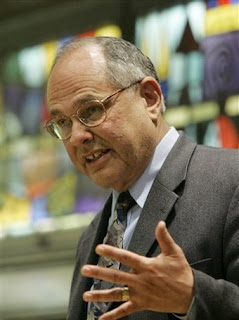 Rabbi Dorff’s latest book has just been published by the Jewish Publication Society. (It seems that he has been publishing books at the rate of Jacob Neusner lately.) This book, For the Love of God and People: A Philosophy of Jewish Law, presents an intelligent and accessible guide to the philosophy that shapes Halakha (Jewish law). While the book is about the Jewish legal system, Dorff also answers the difficult theological questions concerning the relationship of belief in God and the revelation of Torah with observance of Halakha.

Jay Michaelson wrote a praiseworthy review of Dorff’s latest book for the Forward. In his review, Michaelson laments the fact that no such book was available to him while he was growing up in the Conservative Movement. In his closing paragraph, Michaelson asks whether this book would have satisfied his philosophical questions when he was a young camper at the Conservative Movement’s Camp Ramah. Michaelson dismisses the question because he was more of a rationalist back then anyway. Regardless, I appreciated what Michaelson had to say about Jewish summer camp and how the feelings that occur at camp might just be enough of a reason to subscribe to the system of mitzvot (commandments). Michaelson writes:

“…one of the great successes of Jewish summer camp is how it provides an immersion experience: The love is felt, obviating the need for explanation. Who knows? Maybe I could have been told, ‘You know that feeling you get, when the davening is beautiful and the weather is fair; when your friends put their arms around you and sing ‘Lecha Dodi’? That is the reason we do this — because what you feel inside is love, and God is the name we give it.”

Amen to that. And to Rabbi Elliot Dorff for writing a book that will help so many work through their difficult questions concerning belief and the observance of Jewish law in our modern times.