After the success of his 2009 Facebook Haggadah, I predicted that Carl Elkin would say “Next Year on Twitter.” Apparently, that prediction didn’t come to be.

However, I am happy that after his brilliant Facebook Haggadah parody last year, Elkin is back for more. The creator of last year’s spoof has created a new and improved 2010 Facebook Haggadah, complete with a status update from the 1st sister Miriam who reveals the color of an article of her clothing just as her descendants do thousands of years later on the social media site for breast cancer awareness. In the new version, Elkin also makes comical references to Farmville and FourSquare. Woody Allen, Sarah Palin, and Albert Einstein all take part in the social networking seder discussion.

Even the prophet Elijah is a part of this haggadah. Clearly a technophile, Elijah updates his status letting us know about his latest gadget: “My new smartphone with Nav software and turn by turn directions is making this year’s rounds a breeze! Currently 350 households ahead of schedule.”

I’m not going to hold my breath for a Twitter based Haggadah, but at the end of this year’s Facebook Haggadah Elkin does promise that next year’s version will be an iPhone app! 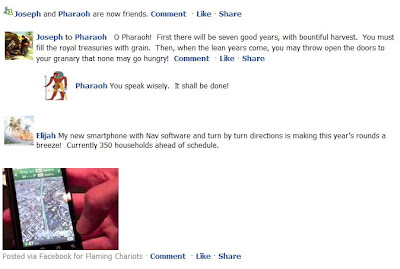