Photoshop might not have been around a century ago, but the altering of images to change history has been around for a very long time. 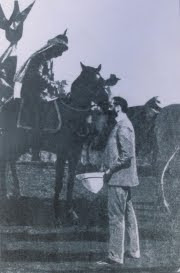 A couple weeks ago I ventured into the basement floor of the Steimatzky’s flagship bookstore in the Mamilla Mall in Jerusalem. The three-story store is located in the building that once belonged to the Stern family, who hosted Theodor Herzl on his one and only visit to Jerusalem and the basement is now a mini museum devoted to the founder of modern Zionism.

Looking at several photographs of Herzl with famous leaders in Jerusalem, my attention was directed to what looked like a Photoshopped photo from over 100 years ago. In the next display case, hung a series of photos that remind us that we can’t always trust photographs.

Here’s the story: On the morning of October 28, 1898 outside of the agricultural school at Mikve Israel, Kaiser Wilhelm II of Germany, astride a white stallion and wearing a gold helmet, stopped for a moment on his way to Jerusalem. By the roadside stood Theodor Herzl, who considered the Kaiser’s recognition crucial for international approval of his plan to resettle the Jews in the land of Israel. 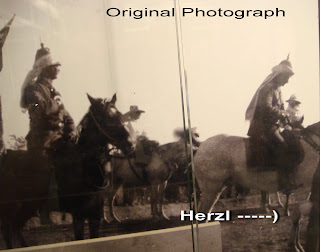 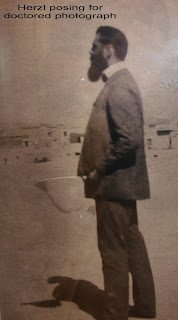 The original photograph of Herzl and the Kaiser was not acceptable as only Herzl’s left foot could be seen in the photo. Herzl, aware of the importance of the photo, ordered its reconstruction. A photo of Herzl was taken on the roof of the school and superimposed onto the photo after seating Kaiser Wilhelm II on the dark horse (instead of the original white stallion).

There are many examples of such photo manipulation. Time magazine’s website lists its choices for the Top Ten Doctored Photos and warns that “photographers have been manipulating imagery since the medium was invented”.

Doctored photos have been in the news lately following the Reuters scandal concerning its manipulation of photos from aboard the Mavi Marmara, one of the ships in the flotilla that tried to break the Israeli/Egyptian Gaza blockade last week.

Reuters is claiming that doctored photos that it published, which fail to show individuals aboard the Mavi Marmara holding weapons are the result of an “editing error.” According to the Israel Matzav blog, the agency has said the absence of the activists holding knives in the pictures it originally published to its wire was an editing error. 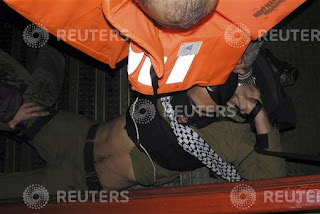 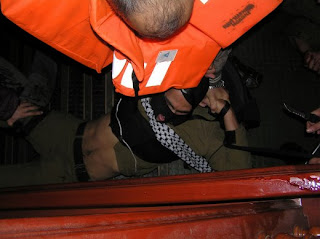 In a statement given to Journalism.co.uk they said, “Reuters is committed to accurate and impartial reporting. All images that pass over our wire follow a strict editorial evaluation and selection process. The images in question were made available in Istanbul, and following normal editorial practice were prepared for dissemination which included cropping at the edges.”

The uncropped images have now been reinstated as part of the agency’s package of images from the aid ship attack.

The moral of the story is that while a photo may tell a thousand words, you might want to take those words with a grain of salt.