Skip to the content
Here’s my recent article for JTA.org


The most well-circulated piece of trivia about Gene Simmons, former member of the band KISS, is that he was born in Haifa, Israel. For years Simmons’ birthplace and Israeli heritage were rumored to be true, but in the Digital Age it would be confirmed with Wikipedia and video interviews on YouTube.

Now there is no question that the aging rock star, who is starring in his own reality TV show, “Gene Simmons Family Jewels,” traces his roots to Israel. 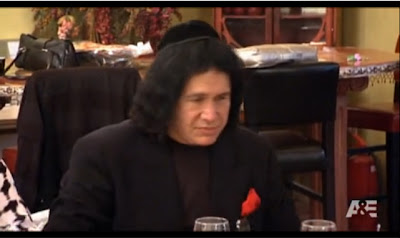 In back-to-back recent episodes, Simmons ventures back home to Haifa. With son Nick and soon-to-be wife Shannon Tweed, a former Playboy Playmate, along for the trip, Simmons takes an El Al jet to Tel Aviv en route to his birthplace, where he receives the City of Haifa’s Medal of Honor from the mayor.

Simmons had left Israel as an 8-year-old, moving to the United States with his mother, a survivor of Auschwitz.

In the episode appropriately titled “Blood is Thicker than Humus,” Simmons explains that he is reluctant to return to Israel, but his fiancee convinces him to go. When he arrives at his hotel, the cameras are in tow for his first experience speaking to Israelis.

Using a perfect Hebrew accent, Simmons checks into the hotel with the pseudonym Oy Vey. But it isn’t long until the memories of his childhood lead him to a very emotional moment when he proclaims, “Hashem sheli [my name is] Chaim Veitz,” using his birth name Weitz and expressing that he would be nothing without his birthplace.

Simmons and his entourage get a VIP tour of the important sites in Israel, including Yad Vashem and the Western Wall. He also visits Cafe Nitza, the bakery where his mother worked. Sitting down to enjoy a pastry, the aroma from the cafe revives memories for Simmons.

On a nostalgic tour of his childhood, Simmons visits Rambam Hospital, where he was born in 1949. He returns to his childhood house in Haifa and speaks in Hebrew with Chaya Cohen, his neighbor growing up.

The most poignant segment of the two episodes is the reunion dinner secretly convened by Tweed that allows Simmons to meet his Israeli family 50 years since he left the country. He meets his half-brother and three half-sisters for the first time. Together with his half-siblings — his father’s children from subsequent marriages — Simmons visits their father’s grave and says the Kaddish memorial prayer.

Say what you will about reality TV, the Gene Simmons nostalgia tour to Haifa is must-see television before the High Holidays. If watching a former rock star tour Israel as the distant memories come back in a cloud of nostalgia doesn’t do it for you, then perhaps the message of reconnecting with family will.

As Simmons puts his father’s yarmulke on his head, he suddenly realizes how important his roots are to him.