Here’s my recent post on the “Rabbi J in the D” blog for Community Next:

After a decade-long $150 million campaign, the National Museum of American Jewish History officially opened November 14 in Philadelphia. The 100,000 square foot museum is on Philly’s Independence Mall. 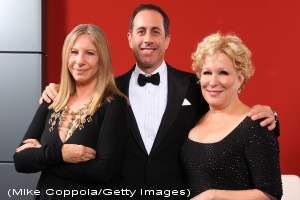 The new museum’s gala grand opening had hundreds of donors who paid between $1,500 and $5,000 to be part of the celebration with Vice President Joe Biden, Jerry Seinfeld and Bette Midler.

I did a double take when I read what Barbra Streisand, who didn’t perform at the gala event, bought in the museum gift shop. According to JTA, “One of 18 individuals highlighted in the museum’s Only in America Gallery/Hall of Fame, which greets visitors on the first floor, Streisand made time to stop in the museum’s shop, where she spent $800 on three yads (Torah pointers) and silver candlesticks.”

Is Babs a regular Torah reader (I’d pay to hear that!) or are the yads gifts for friends? If Streisand wants to use her yad to read Torah in an Orthodox synagogue, I’d advise she first dresses up like a man. Here’s what that would look like: