Skip to the content
I began collecting different versions of the haggadah, the Passover seder’s playbook-script-manual, when I was in college. It all started by ordering a new one each year in anticipation of the holiday and somehow my collection now exceeds 100 and has demanded its own bookcase. This pales in comparison with the vast haggadah collection of Irwin Alterman of blessed memory, a brilliant community leader in Detroit who passed away earlier this month and had an exquisite library of some 1,500 haggadahs. His son, a childhood friend, tells me that plans are underway to allow the public to admire his collection soon.

For many Jewish families the version of the haggadah is as much a family tradition as the food served during the seder meal. Just ask many Jewish Americans and they’ll tell you about their deep connection to the Maxwell House Haggadah from childhood seders.

The 21st century, however, has seen a seismic shift from the rather bland (and free) Maxwell House Haggadah to more creative versions. And that transition has also afforded many Jewish families some poetic liberties with the seder script. The more traditional families have always tended toward the keva (Hebrew for rote or routine), while more progressive families allowed for more kavvanah (that unscripted spontaneity)  while telling the Passover story. Truthfully, the seder was always intended to be a symposium or talk-feast with an ample mix of both keva and kavvanah. A famous rabbi quoted in the haggadah believes one must only mention the paschal lamb, matzah and bitter herb to fulfill the obligation of the seder. The rest as they say is commentary.

So when a family is ready to make the move to a new haggadah, what should they look for? It’s important to remember that adopting a new hagaddah can be a costly investment at first. While the Maxwell House Haggadah came compliments of the coffee corporation, today’s options can cost around $20 each which adds up when all twenty-five guests require a copy. The haggadah will be reused year after year (with an increasing amount of wine stains and matzah crumbs) and that’s why it’s important to choose the right one at first.

My two favorites in my collection are the (Arthur) Szyk Haggadah and the (David) Moss Haggadah, but these works of art are more suited to be displayed on the coffee table than used at the seder table. So I’m going to recommend a few options that your family might consider adopting for annual use at the seder. 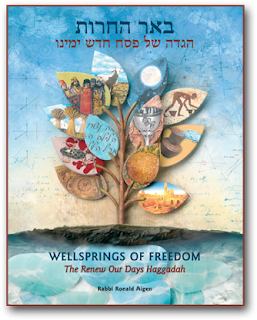 WELLSPRINGS OF FREEDOM: THE RENEW OUR DAYS HAGGADAH
(wellspringshaggadah.com)
This haggadah was edited and published by Rabbi Ron Aigen, a Reconstructionist rabbi in Montreal who has also edited a siddur and a machzor (high holiday prayerbook). This haggadah draws on several modern scholars to provide the commentary of the familiar tale of freedom from slavery. It contains more of the biblical narrative than other haggadahs and uses a “split screen” format meaning the page is divided between the spoken story-line of the seder and the personal, inner journey found in the commentaries. This haggadah, with colorful artwork every dozen or so pages, encourages the leader to be creative and engaging.

JONATHAN SACKS HAGGADA
(www.korenpub.com)
Maggid, a division of Koren Publishers in Jerusalem, offers a haggadah with two texts in one. The traditional text is joined by a collection of thought-provoking essays by Rabbi Jonathan Sacks, Chief Rabbi of the United Hebrew Congregations of the British Commonwealth. The newly revised edition, recently released, includes a new translation and layout. The essays are scholarly, yet eloquent. Sacks addresses the relationship between Passover, Jewish identity, and Jewish history, as well as the role of Passover in Western political imagination and offers new interpretations of the traditional haggadah text.

MY HAGGADAH: MADE IT MYSELF
(madeitmyselfbooks.com)
The Passover seder is unique in that it is a serious discussion around the dinner table that is meant to include both adults and children. But that can also post challenges when the children are very young. Francine Hermelin Levite created her own very kid-friendly haggadah several years ago to keep the little ones enthused. Now, with help from Reboot.com she has made it available for purchase. Packed with nearly 40 pages of engaging, open-ended questions and drawing prompts to do before, during, or after the seder, this haggadah creates lively Passover conversations around the table. Children are able to personalize the traditional story through their own pictures and art (it comes with stickers). The simple, creative haggadah is built around the 15 steps of the seder and, while it is an out-of-the-box publication, it still includes the basic blessings, songs and stories. The essence of the seder is to ask questions and drum up discussion. Hermelin Levite’s haggadah helps that process along (and with little kids there isn’t much time to waste before the eating begins). 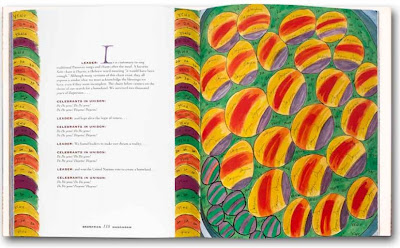 BRONFMAN HAGGADAH
(bronfmanhaggadah.com)
The well-known Jewish philanthropist and international communal leader Edgar M. Bronfman has joined with his wife, artist Jan Aronson, to produce a radical reimagining of the Passover text. The inspirational readings that Bronfman included span from Frederick Douglas to Ralph Waldo Emerson and poet Marge Piercy. The underlying message of the Bronfman Haggadah is that we all possess the capacity for peace and understanding. The watercolor paintings are stunning and are sure to evoke discussion. It’s evident that Bronfman spent a great deal of time putting his version of the haggadah together and it’s sure to become a popular fixture on seder tables this Passover. It’s been described as an “engaging and interactive contemporary account of Passover, which will foster meaningful and constructive dialogue between Jews and non-Jews alike.”

HAGGADOT.COM
If you don’t like anything you see in already published haggadahs, there’s a website that allows you to become the creator and publish your own. As the introduction on haggadot.com states, “Passover is about freedom. But when it comes to the seder, many of us are lost. This website is a resource for Jews of all backgrounds to make the Haggadah that finally feels meaningful for a contemporary seder, with unique perspectives gathered from individuals worldwide.” With an array of classical texts and contemporary interpretations, this website allows the user to create a more personalized version with original writings and artwork. The creators invite users to mix and match content from other users as well as previously published haggadot so that one family’s haggadah may include selections from a 16th century haggadah interspersed with feminist and social justice readings or poetry. The final step is a PDF copy that can be reproduced for seder guests. Wine stains? Just print a new copy. Of course, as the children get older an amended, more comprehensive version can be created and used.

There’s no shortage of haggadahs on the market. Each denomination of modern Judaism has published its own version. And as more haggadahs are available each year more families are reconsidering how they present their seder, the most practiced Jewish ritual today. It’s encouraging to see this change in culture from a rote Maxwell House seder to an embrace of creativity and creating the opportunity for multi-generational dialogue. After all, that’s the whole point of the Passover seder.