Ryan Braun, known as the “Hebrew Hammer”, is having a remarkable year. The Milwaukee Brewers’ All-Star left fielder, who was the National League’s Rookie of the Year in 2007, has 25 home runs so far this season. He’s also on his way to becoming one of the best Jewish players Major League Baseball has ever seen. He’s also helping his team have one of their best seasons ever.

In recognition of his great season with the Brewers, Braun and some teammates were featured on the cover of Sports Illustrated this week. Of course, that honor had people in Milwaukee nervous. Would the infamous Sports Illustrated Jinx affect Braun and Brewers? I’m not sure if the SI Jinx was in effect Wednesday night, but Braun committed one of the worst base running bloopers I’ve ever seen.

Braun was attempting an inside-the-park homer on Wednesday night when he tripped and fell between third base and home plate. He was easily tagged out as he got to his feet and tried to run back to third base. Not only did the TV cameras catch Braun shamefully walking back to the dugout, but they also caught former NBA star Reggie Miller laughing at Braun’s slip and fall from the stands.

Inside-the-park home runs are an uncommon feat in baseball and Braun blew his chance to add one to his impressive statistics. But Braun did give his teammates some good material for a major league prank. Braun’s teammates Yovani Gallardo, Shaun Marcum and Marcus Hanel created a crime scene with Braun’s body outlines along the third base line. Here’s a photo of their handy work: 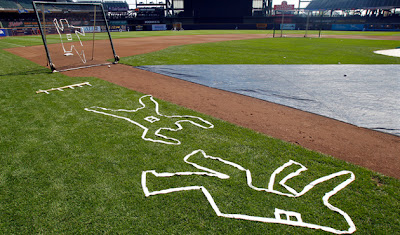 It’s great to see Ryan Braun having such a great season. I’m hoping that his Brewers get a chance to meet my Detroit Tigers in the World Series this year. I first met Braun during his rookie season when the Milwaukee Brewers were in Phoenix to play the Arizona Diamondbacks. The Brewers were staying at the same hotel where I was staying and I had a chance to talk with Braun while he waited for the team bus. I told him it was great to have another Jewish player in Major League Baseball and some of his teammates sitting close by were surprised to learn he was Jewish (I guess that isn’t something that a rookie broadcasts in the big leagues). 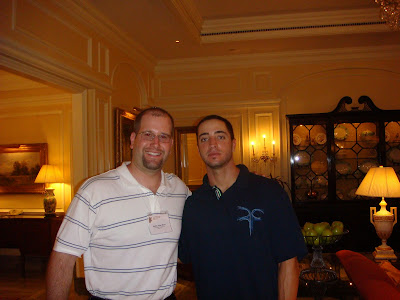 Braun told me that he lived for a short period of his childhood with his grandfather in a house that previously belonged the great Hank Greenberg. If Braun keeps playing the way he has, that house won’t be the only thing he shares with Hank Greenberg.