When Tablet Magazine published the article about Senator Orrin Hatch’s Hanukkah song, Rabbi Jason Herman, who is part of Clal’s Rabbis Without Borders fellowship with me, was quick to send the link to the article over our e-mail discussion list. Little did I know at the time, another RWB fellow, Rabbi Alana Suskin, was already thinking of a way to reciprocate Senator Hatch for his holiday song for the Jewish people.

According to the JTA, “Blogger Larry Yudelson posted a query to his fellow Jewschool.com contributors wondering if ‘there are any special Mormon holidays for which we can return the favor?'” 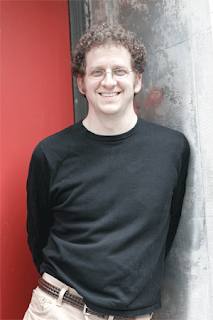 hat’s when Alana, who is also Jewschool’s managing editor, suggested a holiday song for the Mormons. The problems was she couldn’t think of any special Mormon celebrations. Long story short, Rob Kutner (right) got involved. Rob used to write for The Daily Show and I’ve blogged about his hilarious Purim shpiels in the past on this blog. He now writes for the Tonight Show and thought this was a funny idea. So Kutner wrote the Mormon song that Tonight Show band leader Max Weinberg sings to “I Have a Little Dreidel.”

After the bit aired on the Tonight Show with Conan O’Brien, Kutner wrote on Jewschool.com: “It’s definitely an interesting moment when Jewish culture is mainstream enough to provide a window on another minority religion’s relative marginalization.”

And that’s the story of how the Jewish bandleader Max Weinberg came to serenade the Mormon senator Orrin Hatch on the Tonight Show.