I recently stumbled upon two great first-person articles by guys I know. Reading Newsweek magazine on an elliptical machine last week, I immediately recognized Chanan Tigay’s photo on the My Turn page. Chanan went to the University of Pennsylvania with a close friend of mine, and is the son of a Conservative rabbi, Professor Jeffrey Tigay of Penn. I got to know Chanan in 1998 when he was an administrative assistant in the rabbinical school of the Jewish Theological Seminary, where I was in my first year of the program. Sure enough, in the essay Chanan mentions that he got his professional start at JTS doing clerical work:

Yet I was still having trouble thinking of myself as an actor. I was slogging through my day job as an administrative assistant at a rabbinical school, answering phones, making copies and praying for lunch-time, while those around me prayed for something holier.

Chanan penned a truly inspiring and touching tribute about his former director, Gian-Luigi (“Igi”) Polidoro. He writes, “Igi was funny and sharp, and when I was with him I began to see myself as an adult and an actor.” In 900 words, Chanan paid homage to this eccentric artist in a captivating and beautiful way. Perhaps he’ll consider writing a book or screenplay about Igi’s life. 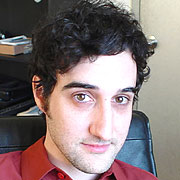 The next author I stumbled upon was the witty Sam Apple. I first met Sam in an Upper West Side Starbucks on Broadway in 1999. Sam was the editor of New Voices magazine and I was in need of some advertising for a small startup Web company some friends and I were trying to launch (JewishStudent.com never saw the light of day). We later reconnected at Sam’s alma mater, the University of Michigan, where I worked at the Hillel and Sam would visit the executive director with whom he was close. A couple years ago, when the Melton Book Club I led discussed Sam’s wonderful book Schlepping Through the Alps, he was gracious enough to speak to the group by speaker phone. I highly recommend Schlepping Through the Alps — it’s a masterpiece.

Well, it wasn’t until I had read the first few paragraphs of a hilarious article in Parents Magazine titled “What’s It Really Like to Be a Baby?” that I realized it was written by Sam Apple. I shouldn’t have been surprised that Sam wrote it because of how witty it was. When Sam and Jennifer Apple’s son Isaac was six-months-old, Sam wondered about what went through his newborn’s mind. So, in typical Sam Apple fashion he conducted some experiments including pouring “no tears” shampoo in his eyes and having Jennifer swaddle him. Funny stuff.

Since becoming a dad, Sam has written some laugh-out-loud articles about fatherhood. I think his best article was about hunting for a mohel (ritual circumcisor) for Isaac’s bris. This was part of a contest in the LA Times in which a guest columnist had to write a column in the trope of Joel Stein. Sam won the contest with a majority of the votes (I only voted once!). Sam’s also got a great article about being a videotaping-obsessed new dad and putting the home movies on YouTube. I can certainly relate!