I often joke that the point of a bar mitzvah is to celebrate the Jewish boy’s realization that he’ll have a much better chance of owning the professional team than playing on it. It’s tongue-in-cheek humor, but the fact remains that there are many more Jewish professional sports team owners than Jewish players.

In Detroit, it might be more accurate to say that Jewish boys who want to play pro sports grow up to be sports reporters on the evening news. Growing up in Detroit, the sports directors of all three major local networks were Jewish men. Eli Zaret on CBS-2, Bernie Smilovitz on NBC-4 and Don Shane on ABC-7.

Eli Zaret is now a reporter for the Detroit Pistons. Bernie left Detroit for New York in the mid-90s only to return two years later. And Don Shane came to Channel 7 in 1989 and never left. I was thinking about the stereotype that Jewish boys don’t play football last night as I watched the late-night news broadcast on Detroit’s ABC affiliate as they replayed Don getting tackled on the sidelines by University of Michigan quarterback Tate Forcier in yesterday’s U-M win. 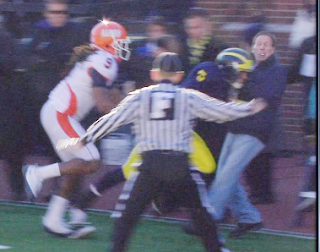 I got to know Don pretty well in the early 90’s when I was a babysitter for his two children. Don lives across the street from my uncle and aunt, and in high school I would play basketball with the guys in that neighborhood at my Uncle’s house, including Don, on Saturday afternoons. Later that night, I would babysit for my cousins or Don’s kids. I loved talking sports with Don because he not only knew everything there was to know about local Detroit sports, he was often the first to know.

In all fairness to Don, the hard hit he took on the sidelines yesterday as he prepared his post-game report had nothing to do with whether Jewish boys play football or not. He was standing innocently on the sidelines when Forcier was forced out of bounds and was pushed directly into him.  He suffered a split lip that required four stitches and a pretty nasty headache (reports confirmed it wasn’t a concussion). Impressively, Don managed to conduct his post-game interviews and even shared some laughs with Forcier.

So, even for those Jewish boys who make the conscious decision to become a sportscaster instead of a football player, remember that sometimes reporting from the sidelines can be a full-contact sport too.

And while I never played high school football (although as a 6-foot-3, 220 pound guy I was desperately recruited each year by the coach), I am impressed by this all-Jewish San Diego high school football team making headlines. The JTA article about this Jewish day school’s football team includes this great question: “Was the stereotype of the Jewish mom or dad, too fearful of their child getting hurt to let them go out for football, turning end over end on its way out of bounds?”

Maybe a few of these Jewish kids will forgo a career as the team owner or sports broadcaster and actually wear a uniform for a pro team some day.