Skip to the content
Was Amy Winehouse Jewish? Yes, she was. The singer, who was found dead today in her London home, was born in Southgate, London to Janis, a pharmacist, and Mitch, a cab driver. 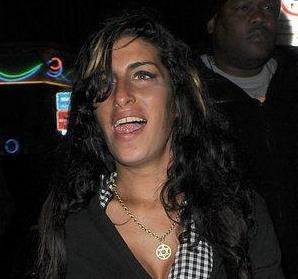 A 2010 article in Moment Magazine titled “Surprise, They’re Jewish,” describes Winehouse as “The 27-year old British, bee-hived vocalist and tabloid headliner is equally known for her innovative songs and substance abuse problems; references to her ‘pipes’ could just as easily conjure her vocal chords or drug paraphernalia. Yet, the bad girl with the pin-up tattoos, soul style and Marilyn Monroe mole piercing was born to Mitchell and Janis, a Jewish couple in north London. Not everyone is surprised to hear that Winehouse is Jewish. Referencing her Semitic-looking visage, Sarah Silverman once quipped, ‘She is Jewish, right? If she isn’t, someone should tell her face.'”

Her obituary in the New York Times states that “Winehouse showed an early talent for performing, as well as an eclecticism that would characterize her later work. She loved her father’s Sinatra records, but she also liked hip-hop; at age 10 she and a friend formed a rap group called Sweet ‘n’ Sour that Ms. Winehouse later described as “the little white Jewish Salt-N-Pepa.”

So far, the cause of Amy Winehouse’s death is not known.

While going for drug abuse treatment seems to be a fad these days for celebrities, there are some celebs who really need it but don’t give it much attention.