This Yom Kippur, I plan to speak to my congregation about issuing apologies for things we shouldn’t have said. I know, that sounds like “nothing new under the sun,” but I’m going to look at how karma plays a role in our contrition. 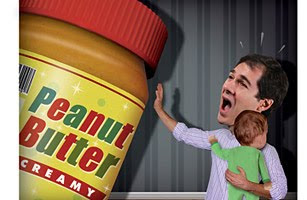 Here’s an example: The witty Joel Stein, who writes the bi-weekly back page for Time Magazine, penned a funny, yet hurtful, LA Times column back in January 2009 claiming that American parents have gone nuts over nut allergies. He wrote, “Your kid doesn’t have an allergy to nuts. Your kid has a parent who needs to feel special.” Ouch!

Stein clearly won no fans from the parents of children with peanut allergies. And I’m sure there were a good number of those parents out there wishing that Joel Stein would get a taste of what they go through on a daily basis — carrying Epi Pens and worrying that their child would come into contact with an allergen. Stein wasn’t alone in writing cynical articles calling into question the mass hysteria caused by over-vigilant parents, but his wit came out as criticism and was very hurtful to many parents.

At the beginning of last year, I wrote a column that questioned whether the increase in food allergies among children was a matter of overreporting. It began with this carefully calibrated thought: “Your kid doesn’t have an allergy to nuts. Your kid has a parent who needs to feel special.” After that, I got a little harsh.

The column was not the first thing that came to mind after my 1-year-old son Laszlo started sneezing, then breaking out in hives, then rubbing his eyes, then crying through welded-shut eyes, then screaming and, finally, vomiting copiously at the entrance of the Childrens Hospital emergency room an hour after eating his first batch of blended mixed nuts. But it was the second thing. Because after my nut-allergy column came out, many parents wrote me furious e-mails saying they hoped that one day I would have a child with life-threatening allergies.

Stein maintained his trademark wit and mockery in the column, but managed to sneak in some contrition as well. Perhaps he was thinking that Yom Kippur was approaching and he owed an apology to all the peanut-allergy parents out there. He wrote, “I realize that the more I understand of other people’s difficulties, the less funny they are.” I’m sorry that Stein’s son Laszlo developed a peanut allergy, but I’m glad the writer saw the error of his ways and found the ability to apologize. That is the message of this season of repentance.

Another possible example of karma calling is Rabbi David Nesenoff getting tripped up in an interview with the Jerusalem Post. Nesenoff, a Conservative rabbi, made headlines last May after videotaping journalist Helen Thomas issuing a career-ending anti-Semitic opinion that Israeli Jews should return to Germany and Poland. Yesterday, in either an act of karma or gotcha journalism, Nesenoff put his own foot in his mouth.

Even though he retracted his comparison of Helen Thomas to Adolf Hitler, The Jerusalem Post made sure that both his comparison and the retraction became part of the public record. The Jerusalem Post reports that “Nesenoff proved he isn’t immune to impolitic remarks when he drew analogies between Thomas, Nazi dictator Adolf Hitler and sex offenders, before retracting the Hitler comparison… Nesenoff also went on to draw an analogy between Thomas, the long-time former UPI and Hearst Newspapers correspondent, and a high school teacher found guilty of sodomy, asking whether such an individual’s record in educating children shouldn’t be blemished by his offense.”

At the end of the phone interview, Nesenoff acknowledged that his comparisons were “a little exaggerated.” The rabbi then retracted the Hitler comparison and said he was sorry.

I don’t question the fact that Helen Thomas should have resigned after making her comments, but the type of journalism used by Nesenoff to acquire those comments was questionable. “What comes around goes around,” as they say. Nesenoff now finds himself apologizing for his own insensitive comments. This could be karma masked as gotcha journalism. Nesenoff tried to retract the statements he made which are damaging to his own character and integrity, but he learned the same lesson that he taught Helen Thomas: Anything you say can and will be used against you.

A lesson was learned in both the case of Joel Stein and the case of Rabbi David Nesenoff. Both men got a taste of their own medicine and issued apologies. No matter how we get there, that is the ultimate goal of repentance — feeling contrite and owning up to your wrongdoing.