Skip to the content
This D’var Torah for Parashat Korach was published in the Detroit Jewish News:

The Tallit: A Reminder of Our Relationship With God

Hanging in the back of my closet is a beautiful tallit that was hand-woven in Ethiopia. This colorful prayer shawl was purchased by my grandmother several years ago when the renowned “Mitzvah Man” Danny Siegel visited Adat Shalom Synagogue. The tallit is waiting in my closet until my oldest son becomes a bar mitzvah and, God willing, my grandmother can present it to him as a gift. 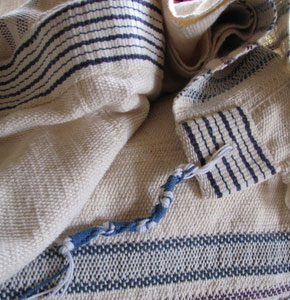 The tallit is a fascinating garment. There are many different styles and fashions of the tallit that we see being worn at synagogue during prayer services, but the most important component to the tallit are the fringes that hang from the four corners.

The Israeli poet, Yehuda Amichai, writes the following about the tallit:

Whoever put on a tallis when he was young will never forget:
taking it out of the soft velvet bag, opening the folded shawl,
spreading it out, kissing the length of the neckband (embroidered
or trimmed in gold). Then swinging it in a great swoop overhead
like a sky, a wedding canopy, a parachute…

Whoever has put on a tallis will never forget:
When he comes out of a swimming pool or the sea,
he wraps himself in a large towel, spreads it out again
over his head, and again snuggles into it close and slow,
still shivering a little, and he laughs and blesses.

In Parashat Korach, Moses’ cousin Korach mounts a rebellion against him. Korach argues that he has as much right to lead the Israelites as Moses or Aaron, who are in the same generational line on the Levite family tree.

The tallit plays an interesting role in this biblical story of mutiny. The Korach narrative begins with the words Vayikach Korach, which come immediately following God’s instructions regarding the laws of tzitzit, the fringes with a blueish/purpleish cord (a p’til tekhelet) that are commanded to be attached to ones tallit. Each four-cornered garment must have four tzitziyot hanging from each corner. Midrash Tanchuma notices the words Vayikach Korach – “Korach took” and imagines what Korach took by associating that phrase to the section preceding it.

The Midrash imagines that what Korach took were the words from above in the text concerning tzitzit. The Midrash presents a story in which Korach tries to embarrass Moses by challenging him with a difficult question. He says, “You told us to put tekhelet on the tzitzit, tell me if the tallit is entirely made up of tekhelet, would such a tallit still require four tzitzit?” Moses replies that it would still require tzitzit.”

Korach then responds with a challenge, questioning the fact that four strings of tekhelet can allow you to wear a tallit, but a garment made entirely of tekhelet cannot be exempted from this restriction?” Korach isn’t simply challenging Moses’ authority, but also mocking him, and by extension mocking God’s Torah.

Whether Korach was correct or not in challenging Moses’ authority, he was wrong for using a holy garment for the purpose of mocking the Israelite leader. The tallit is a reminder for us. It is used during prayer as a sign of our relationship with God through the commandments.

When we wear the tallit, we should look down at its fringes, the tzitzit, and be reminded of God’s love for us and of God’s gift of the Torah. We should also wear it proudly and let it serve as a reminder of how Moses and the Israelites did not allow Korach and his gang to overthrow their leadership.

Each morning when we wrap ourselves in our tallit let it serve to show that Korach was defeated and that the tallit should not be used for such negativity. Let us consider the words of Yehuda Amichai and be ever cognizant of the ritual of tallit – from taking it out, to folding it and putting it back in its bag.

The tallit that I wear on Shabbat has an additional special meaning for me. This white tallit was a gift from the Jewish Theological Seminary upon my ordination as a rabbi. Like any tallit it has stories to tell. It has significant meaning because it reminds me of my experience in rabbinical school. It also brings to mind the many life-cycle events when I was wrapped in its embrace.

The tallit is a beautiful way for us to wrap ourselves in God’s embrace and be reminded of God’s love for us. Korach’s error was in using the tallit to undermine Moses’ authority and publicly humiliate him. Let us use the tallit for good. Let us wrap ourselves in the tallit and give thanks for leadership rather than trying to weaken it.