I’ve been thinking a lot about labels lately. I recently wrote an op-ed about denominational labels in Judaism that was published in the Detroit Jewish News and on the Huffington Post website. In it, I explained how ambivalent I am about labeling individuals because these labels don’t always help us understand the individual better. Calling a Jewish person an “Orthodox Jew” doesn’t tell us much about them. In fact it only leads to misperceptions (Are they Modern Orthodox or Ultra-Orthodox? Are they actually unobservant, but affiliate with an Orthodox congregation?). 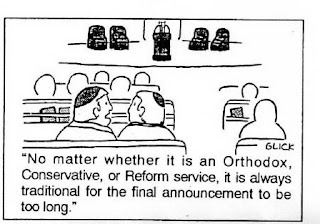 The analogy I’ve used several times in the Melton Scholars course on denominations that I’ve been teaching this fall has been that one could walk into ten different ice-cream parlors and find that each parlor sells an ice-cream labeled as “strawberry.” Yet, despite the identical label, each strawberry ice-cream will actually taste quite different. As I wrote, the woman who labels her religious affiliation on her Facebook profile as “Recon-newel-ortho-conserva-form” isn’t confused, hazy or even necessarily post-denominational. Rather, she is articulating the notion that we don’t have to choose just one label. There is much more cross-denominational activity today, and based on reader comments to my op-ed on Huffington Post, this is just as true in many other faiths as well.

In thinking of a photo I could use to complement my op-ed, I decided that a car bumper is often used to display ones ideological, political, and religious identity and affiliation. I imagined a car bumper with bumper stickers representing all the trans-denominational activities in which I’m involved –the pluralistic Jewish camp where I work, the Conservative synagogue where I’m a member and my children go to school, the Reform temple where I teach, the Reconstructionist congregation where I serve as the part-time rabbi, the Chabad-affiliated special needs for children organization I support, the community day school my child attends, and so on.

I didn’t manage to include all of those institutions, but I took a photo of the bumper on my wife’s minivan with several of these magnets (magnets seem to be the new bumper stickers and it’s nice that they’re temporary in these more transient times). In the end, I decided not to use that photo to accompany the HuffPo posting. (The photo on HuffPo is of a liberal Jew and a traditional Jew arguing as my friend and local rabbinic colleague Rabbi Arnie Sleutelberg looking on.) 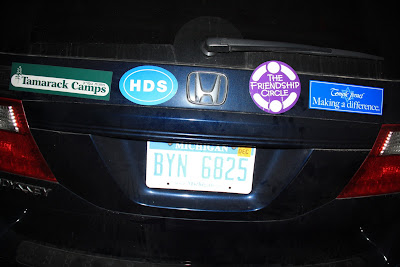 I did, however, post the “bumper stickers” photo (above) on Facebook where it was viewed by my friend and colleague Rabbi Paul Yedwab of Temple Israel in West Bloomfield, Michigan. Rabbi Yedwab opened his sermon this Shabbat by mentioning my photo:

Rabbi Yedwab goes on in his sermon to mention some interesting new research that has been done recently into the field of language and epistemology, and then offers some suggested rules for communicating with our “necessarily insufficient words.” One of his rules is to stop communicating in Cyberspace. As a tech-embracing rabbi, I can’t say I agree with that proposed rule, although I concur that we all need to be mindful of how we communicate through technology.

Overall, I agree with Rabbi Yedwab’s message. Just like God, we humans are beyond labels. It is all too easy to assign labels to everyone we know and everyone we read about. The alternative is to use our God-given ability to communicate in order to learn about others. Rather than asking them what kind of Jew they are, we should ask more specific questions about their beliefs and their doubts, their affiliation, their education and their faith history. We should ask them what gets them out of bed in the morning and what do they do to recharge their spiritual batteries. And then we should listen.