Skip to the content
Twenty-five years ago today on Sunday, December 6, 1987, I headed off to Detroit Metropolitan Airport with my mother. Downstairs at the airport by the baggage claim we were divided into one of three chartered airplanes to fly to Washington D.C. for the march in support of Soviet Jewry. Those who were present at the March are encouraged to contribute their memories to the 25th anniversary website.

I was a 6th grader at Hillel Day School where we learned of the plight of Soviet Jewish Refuseniks who couldn’t leave the Soviet Union and were prohibited from practicing Judaism. That day with thousands of other like-minded Jews was a memorable experience for me. 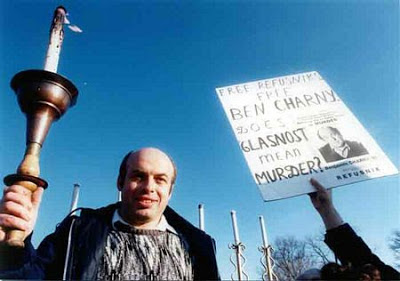 I remember eating bagel and lox on the plane which was donated by Paul Borman, a Detroit philanthropist who owned Farmer Jack — a local grocery. I also remember being led in Jewish songs on the chartered plane by the late David Hermelin, another noted philanthropist in Detroit.

When we arrived to Washington we boarded buses to the National Mall where we called for the immediate mass emigration of Jewish refuseniks out of the oppresive Soviet Union. The entire Detroit delegation, wearing our white “Let My People Go” hats, marched from the Washington Monument to the Capitol Building. We sang “Hinei Mah Tov” and heard from Vice President George Bush, Elie Wiesel, and then Natan (Anatoly) Sharansky.

It is truly amazing how far we have come in the past 25 years. The 250,000 marchers made a difference as did all of the people who carried books and Jewish ritual items to the Former Soviet Union. When I was in Berlin with a group of rabbis in February 2011 I learned firsthand so much about the plight of the Refuseniks. Many Jews from the Former Soviet Union emigrated to Berlin and I had the privilege of hearing their story.

On this 25th anniversary I am recalling that memorable day in Washington and thinking about my bar mitzvah in October 1989 when I celebrated this life-cycle event with my Russian twin. May our people no longer no the oppression that our brothers and sisters in the Former Soviet Union experienced.