For generations, fundraising efforts for the Jewish National Fund have centered around dropping loose change into little blue metal boxes. In fact, stories abound regarding the millions of dollars sent to the JNF from Hebrew School children to plant forests and make the dessert bloom in Israel during the first decades of statehood.

Apparently, the Jewish National Fund has now moved on from the little blue boxes (pushkes) and is ready to try something new. If the JNF was able to make the dessert bloom then perhaps it won’t be such a monumental task to revive the career of 1990s rapper MC Hammer. Yes, THAT MC Hammer! 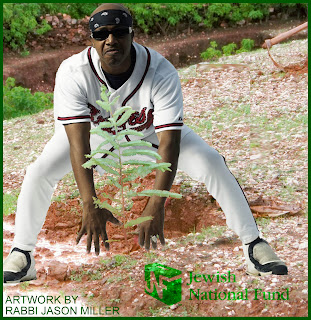 On September 22 in Toronto the JNF will host its Future Party and it will be “Hammer Time.” I’m not sure exactly what the conversation sounded like when the Toronto branch of the JNF was planning this Future Party. What other names were thrown out before they arrived at MC Hammer? Did they consider Bobby Brown or Tone Loc? Maybe Kid ‘n Play would be a bigger draw, I’m not sure.

I certainly hope the crowd will come out for what will definitely be a nostalgic evening for many of the young adults who were in middle school and high school when MC Hammer was turning out hits like “U Can’t Touch This” and “Hammer Time”.

The event benefits a very important cause. Proceeds raised from the Future Party will go toward the development of a sports field at the Yafit Park complex in Kibbutz HaHotrim in the northern Carmel coast. The project will fund a multi-functional sports field where the kibbutz residents can enjoy games of football, volleyball and basketball. In 2000, the kibbutz economy collapsed, and as a result the community underwent radical changes in its socioeconomic structure.

Tickets for the Future Party featuring MC Hammer can be purchased online.