Michigan Governor Jennifer Granholm has taken quite a bit of criticism over her recent “no meat on Saturdays” proclamation. Or, as Brian Dickerson of the Detroit Free Press wrote: Gov. Jennifer Granholm is in “a tall vat of deep-fried tofu.” 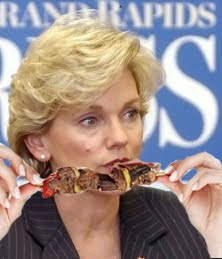 Granholm reasoned that in Michigan, a state hit hard by the economic recession, it’s become more difficult to feed the family meat meals. Essentially, she was just trying to help Michiganders save money during challenging times. However, like Oprah Winfrey a few years ago, Granholm neglected to consider how a move to vegetarianism would affect the agricultural industry. Obviously, Michigan farmers were less than thrilled by the governor’s meatless idea, even if it was only intended for one day of the week.

But there’s another segment of Michigan’s population that Governor Granholm didn’t consider: The non-vegetarian Jewish citizens of Michigan who enjoy eating meat for Shabbat lunch on Saturdays. While kosher meat is certainly more expensive than the tofu the governor is recommending, there are a good number of Jewish people who enjoy a hot meat-filled cholent on Saturday afternoon.

I think Granholm’s intentions were good, but I’m just not willing to forgo cholent, chicken, or even a turkey sandwich following Shabbat services on Saturdays. And I can certainly understand how this weekly push for vegetarianism would hurt local farmers financially.

Maybe Brian Dickerson put it best when he wrote: “Granholm and other politicians should take note: No one likes being told what’s good for them — unless they’re paying a cardiologist for the privilege.”