Skip to the content
After posting a photo [below] with Matisyahu backstage at his recent Detroit concert, the questions began. Friends wanted to know if he was wearing a kippah (yarmulke) or tzitzit (ritual fringes), whether he was eating kosher, and if I asked him if he was still frum (religious). For the record, he still keeps kosher and mostly eats vegan (although before his concert he ate a bagel with creamed herring at NY Bagel, a local Detroit bagel store that I certify as kosher). 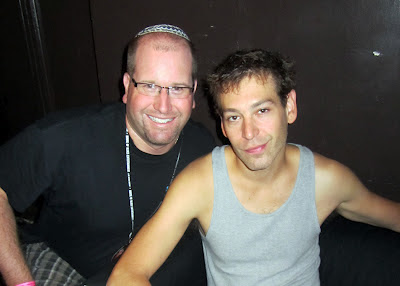 I understand fans’ fascination with Matisyahu’s religious transformation. After all, he’s a celebrity who became famous as a result of his Hasidic look and he now looks significantly less outwardly religious. However, Matisyahu’s transformation isn’t unique and that is precisely what I explained to those who asked those questions.

I reminded them that we all know people who became religious and then decided to make another lifestyle change by changing their level of observance We all know religious Jews who have veered “off the derech” (the path of observance). In the case of Matisyahu, because he’s in the public eye his personal spiritual and religious transformation is scrutinized.

His journey is more complicated than deciding to shave his beard and to stop wearing religious garb. His journey begins in childhood. Matthew Miller (AKA “Matisyahu”) wasn’t born into an observant family. He was brought up as a Reconstructionist Jew and went to Hebrew School at Bet Am Shalom (Reconstructionist) in White Plains, New York. He went to Israel with the Alexander Muss High School in Israel program. A devoted Phish Head, he started attending the Carlebach Shul in Manhattan and becoming more ritually observant. In his early 20’s he joined the Chabad Lubavitch movement and began using his Hebrew name “Matisyahu.” In the past year, he has left Lubavitch, shaved his beard, and stopped wearing a kippah and tzitzit. 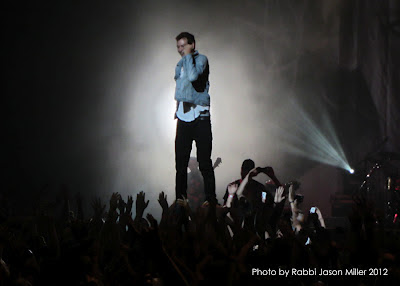 Since Matisyahu’s religious appearance is a cause célèbre, his fans want to know if his religious observance has changed in addition to his “look.” Does he still observe kashrut (the Jewish dietary laws) and pray daily? Does he observe Shabbat anymore? How has his religious transformation affected his wife and children?

I certainly wasn’t going to ask him any of these personal questions when I met him after his recent concert (I first met him after a concert in 2004), but Heeb writer Arye Dworken didn’t shy away when he interviewed him recently over the phone. As Dworken writes, “It turns out though that while all the other media outlets focused on follicles, there was a lot more going on inside the mind of Matthew Paul Miller. Yes, the man behind the unkempt whiskers is going through some changes, stylistically, aesthetically, philosophically, artistically, and religiously. And while it saddens me to see any charismatic and talented young Jewish role model struggle with his identity especially when his unprecedented example has meant and can mean so much to many in our small and insular community, ultimately, Matisyahu’s struggle is very real and very much worth discussing.”

Here are a few of Dworken’s more thoughtful questions and Matisyahu’s candid responses:

I’ve got to ask about your wife’s reaction to all of this. I know you have children and you’ve raised them in a fairly strict Orthodox environment…and for a husband and a father to change his aesthetic suddenly… and perhaps his observance… that must be pretty jarring. I think I even read that you didn’t discuss the beard shaving with your wife before getting it done.

Yeah… I love my wife very much. But it had nothing to do with her. I chose to become religious. I chose all that. I never said this is permanent and this is who I will be for the rest of my life. People who are close to me who chose to be close to me, and they have to accept that. In general, the whole beard thing was very personal. I am in the public eye so I knew it was going to be discussed… but I was trying to not think of other people at the time. I wanted it to be pure.

Your beard was your identity. Like Batman has a mask. Or Paul Wall has grills. And the Jewish community respected you for your uncompromising observance, even if, to many, it started and ended with aesthetics.

Yes, but I think that I should never see myself being dependent on the Jewish community. I saw my crowd grow from being 80% Jewish to there being maybe three or four beards at a show. Maybe five or ten yarmulkes out of a crowd of thousands. If Marley shaved off his dreadlocks, he maybe would have not been as cool but his music would have still touched the souls that it did.

I’ve got a chef who cooks vegan and it’s kosher. That’s not an issue though. The concept to me is much deeper than mixing meat and milk. You shouldn’t get caught up in all the stuff. It has to be about healthy, about mind, body and soul. You can keep kosher and be completely out of shape. If I didn’t have Shabbos to turn off the phone, the computer, and to not tour–that’s a deep experience. Keeping Shabbos back in the day could sometimes be like a bad acid trip. I’m stuck in a dark place for twenty-five hours, sometimes on tour being in a hotel with no TV, being alone… that was really lonely. So I’ve come a long way as far as my relationship with Shabbos, in understanding it. In making it personal. And my thinking is, why not do that on Saturday?

I’m a blend right now with what goes with my intuition and what goes with the rules. But why do I keep the Shabbos though? Is it guilt? Is it meaningful to me? I still have to sift through it.

How does one “sift” with a family and a spotlight?

I’m very open with the kids. I’m very comfortable with what im doing. My oldest son… we have conversations. We talk about it. I could say, we could never do this before…or mom doesn’t want us to do this… but dad is okay with it. It can get confusing but it’s important for me to show them that there is a broader perspective. This world that they’ve been raised in –basically the Lubavitch headquarters and then on a tour bus –this is a beautiful opportunity for them to have these experiences. This is real. Change happens and you can’t always be sure of your decisions and beliefs. I think that they have to make their own decisions in life. They can’t have anyone telling them what to do. Not even me.

Do you want them being brought up in a Yeshiva upbringing?

I wouldn’t put them in Yeshiva, if it were up to me. There are some beautiful aspects to it. There are some holy and beautiful things to it… being outside of the mainstream culture which focuses on being cool, girls, and all that….the main thing for my kids is that they should be taught to think and question. That didn’t happen for me until college because I was in public school. I was exposed to my lifestyle, but no one else’s. The main thing [for my kids] is a place that can let them grow and learn and question. Next year, they’re going to a home school-type program where they learn differently. I think it’s important to get past the idea of who and what you are. It’s good to have identity and know what you are. I tried on different things…I wore a yarmulke on the subway, I grew a beard…that was me exploring. I don’t like the concept that we’re taught in Yeshiva of being the chosen people and that’s so rampant. I’ve seen that a lot. And my kids have said that coming home from school…and I’ve gone in to speak to teachers about that.

Are you still wearing a yarmulke?

I think basically when I took on the look of a chassid, there was a whole look. A whole vibe. It was style. I decided to be a chassid. But I was also twenty-one years old. I remember when I started wearing a yarmulke and started growing the beard and got the tzitzis all at once. It looked cool to me. It completed the uniform, but then I got pushed into the suit. That became later when I got really sucked in to Chabad. You need to wear a hat and a suit. In retrospect, it was a style thing. I know the yarmulke represents more than style… but it didn’t fit with who I was any more. Does it really represent my fear of God? That’s bullshit. I wore a yarmulke when I was drunk and puking in public. That became nothing to do with fear of God. People act disrespectfully when they’re wearing a yarmulke.

But do I feel God without the yarmulke? It did bring me to a different standard, yeah. I mean, I stopped checking out girls when I was twenty-one and wearing a yarmulke. But it wasn’t about God, it was about identity. I went into a gas station in South Carolina and had it on — I forgot to take it off — and I remember the reaction of the people in the gas station. I remember thinking, Oh yeah, I’m different. I felt proud. But then it became less important to me. My spirituality is happening inside. If it’s really happening inside, I really feel for myself and I don’t need anyone else being aware of it.

Getting back to the new record, you open it with the words of praise “Yevarechecha [you should be blessed].” Why start the record with such a strong Jewy opening?

Shaved beard and blonde hair. He’s obviously given up on Judaism, most people will say. On the contrary, I feel more spiritual than I ever have. It’s not that simple as people want to see, and so I think it’s cool that the first thing someone heard on this record is yevarechecha. It’s a message that we [just] can’t all have simple.

So if there are so many changes here, then why keep the name Matisyahu? Why not go back to Matthew if this is about reinvention?

Judaism is still very important to me. It’s still a big part of who I am. Looking here next to me…the books I have are Burnt Books, a comparison of Rebbe Nachmun of Breslov and Franz Kafka. Another is a tehillim, another is a siddur and another is a biography of the [Rebbe] [Note: Matisyahu mentioned a specific Rebbe but I was unable to hear it]. The name “Matisyahu” means a lot to me and it’s not hard to say. Like, it doesn’t have a “chh” in it. It has a spiritual life force. My real name Matthew or Paul are both Christian names and so I don’t relate to them. But Matisyahu feels like it has a spirit I relate to.

If we learn anything from Matisyahu’s very public religious transformation it should be that our identity isn’t static. Our lives are journeys and the only thing different about Matisyahu’s journey is that it is being lived out in the public eye. We all change our outward appearance, our religious observance and our convictions. Matisyahu’s look may have changed drastically, but his music will continue to be full of faith, fervor and spirituality. Personally, I have tremendous respect for Matisyahu’s courage in making these changes. He’s proving that being religious isn’t about a long beard, dangling tzitzit, and a black hat and suit. It’s what’s inside that matters most.

Here’s video of Matisyahu’s encore performance of “One Day” this past Sunday at the Fillmore in Detroit: