Skip to the content
A couple years ago I wrote about non-Jews observing certain Jewish customs. I looked at such examples as Justin Bieber reciting the Shema in Hebrew before each concert as well as non-Jews maintaining kosher diets, hanging mezuzahs on their front doors, dancing the Hora at weddings and erecting sukkahs.

The new trend seems to be non-Jewish celebs adopting Hanukkah rituals. While conservative pundits in the media claim there is a war on Christmas, just the opposite seems to be true about Hanukkah. More menorahs are being displayed in the public square. Chabad Lubavitch has politicians and celebrities light super-sized menorahs. Even Gene Robinson, a gay Bishop, brought a Hanukkah gift of dreidels to Jon Stewart when he visited the Daily Show during the holiday. And a call for new Hanukkah songs has been answered by a rapper.

Heeb asks, “Has Hanukkah become the must-be-seen celebration for the hip and famous, regardless of semitic bona-fides?” What prompted that question was a simple tweeted photo from singer/actress Zooey Deschanel, who is Roman Catholic. Deschanel’s tweet said “Happy Chanukah y’all!!!” and was linked with an Instagram photo of her lighting the Hanukkah menorah. That photo has received close to 100,000 likes on Instagram. 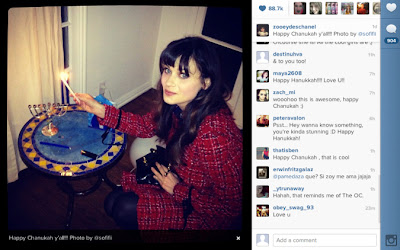 During the Hanukkah holiday this year, we also saw one NBA team pay tribute to their Jewish fans. The Houston Rockets posted a video of their players singing the Dreidel song. Some of the players really got into the spirit. The video includes former New York Knicks surprise star Jeremy Lin, but the highlight is Carlos Delfino who seems to have a lot of fun singing about the dreidel he made.

Jimmy Fallon also got into the Hanukkah holiday spirit by singing a dreidel parody to the tune of Flo Rida’s “Whistle” song. With Rashida Jones, who is Jewish, Fallon pulled a dreidel out of his pocket and began signing, “Can you spin my dreidel baby, dreidel baby, let me know. Girl I know that you’re not Jewish so I’ll start real slow. Then Rashida Jones sings, “Just put your fingertips together and you say Shalom.” 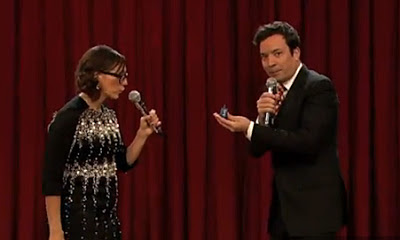 The ultimate in non-Jews doing Hanukkah this holiday season has to be the recently released Hanukkah rap by Too $hort, one of West Coast hip hop’s pioneers. While Too $hort might be best known for his hit song “The Ghetto,” his Hanukkah rap might catch on (at least in Jewish high schools). Too $hort released the Hanukkah rap song exclusively on TMZ.com and it can be listened to here. He’s not the first non-Jew to release a Hanukkah song of course. The Barenaked Ladies have sung several Hanukkah songs and rock band Incubus put out a nice Hanukkah song back in 2007.
So while many Jewish parents complain that not enough emphasis is placed on Hanukkah during the winter holiday season, many non-Jewish celebs have catapult the Jewish holiday into the mainstream. Maybe rapper Too $hort wouldn’t be Jewish parents first choice to sing about Hanukkah, but the thought is there. Hanukkah will never be as popular as Christmas, but the Jewish holiday about the miracle of light and an unforeseen victory over the tyrant Greco-Roman army is getting its due in pop culture.
(c) Rabbi Jason Miller | http://blog.rabbijason.com | Twitter: @RabbiJason | facebook.com/rabbijasonmiller