There have been several former NBA players who have gone on to play for Israel’s Maccabi Tel Aviv basketball club. However, I can’t think of any players to do so while in the middle of an NBA contract. Sacramento Kings player Omri Casspi has announced that he may return to his former team in Israel should the NBA impose a player lockout next season. 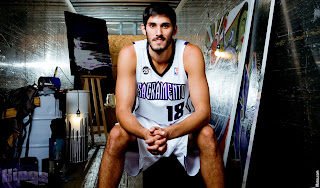 Casspi’s the first Israeli to play in the NBA (New Jersey Nets player Jordan Farmar has an Israeli step-father, Yehuda Kolani from Tel Aviv). JTA reports that Casspi told Israel’s Army Radio Thursday that he would consider rejoining Maccabi Tel Aviv if the league and the players’ union do not come to a new compromise by June 30, the expiration of the collective bargaining agreement.

According to the Jerusalem Post, Casspi would be allowed to play abroad in the event of a lockout. While Casspi’s playing time with the Kings has been limited lately, he did make news earlier this month with his “Sheket B’vakasha” slam dunk.