My first exposure to Catholicism was as a teenager. I was the assistant to a photographer who photographed several Catholic weddings. I found it fascinating to be in these beautiful churches and watch the religious rites of the Catholic tradition. I joked that, at the time, I had been to more Catholic weddings than Jewish weddings. That quickly changed. 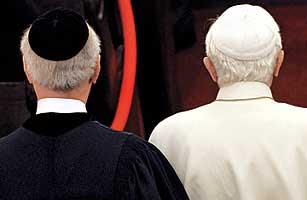 My next experience with anything Catholic was in rabbinical school when I was selected to participate in an interfaith dialogue program called Seminarians Interacting. The now defunct program brought Christian, Jewish, and Muslim theological students (future priests, rabbis, and imams) together in a setting of mutual engagement and exchange. It was sponsored by the National Conference for Community and Justice (formerly known as the National Conference for Christians and Jews). The program was hosted at a large, beautiful Catholic seminary in Baltimore. Again, I learned a great deal about Catholics and noted several similarities between their religion and Judaism.

The summer following Seminarians Interacting, I served a chaplaincy internship at Beaumont Hospital in Royal Oak, Michigan. The Clinical Pastoral Education program was made up of two rabbinical students, three future Catholic priests, and about a half-dozen other future religious leaders. My interactions with the three Catholic seminary students led to wonderful friendships. The program was geared toward pastoral education, but our informal conversations during lunch and in the hospital corridors were about our respective religious tradition. We spoke of personal faith, our families, and the stress of our future positions. These coreligionists responded candidly to me about their individual decisions to join the priesthood and live a life of chastity. They explained the hierarchy of the priesthood to me, helped me understand the importance of Vatican II (Pope Paul’s 1965 proclamation of Nostar Aetate), and taught me the symbolism behind the Eucharist (Holy Communion). Of course, their curiosity about Judaism led to many enjoyable Q&A sessions as well. I remember driving to the Sacred Heart Major Seminary in Detroit with one of the future priests to play racquetball (racquetball courts in the Seminary dorms — I was jealous!). On the way, he played a CD for me with the most beautiful Mass service.

Recently, with the Pope’s visit to Israel, I have been thinking much about Catholic-Jewish relations and my own interfaith relationships. This past March, as news of the Israel visit by Pope Benedict XVI was growing, an article in the Jerusalem Post explained that the rabbi of the Western Wall, Shmuel Rabinovitch, said that it is not proper for him to come to the Kotel wearing a cross. He said, “My position is that it is not fitting to enter the Western Wall area with religious symbols, including a cross.” He said he feels the same way about a Jewish man walking into a church wearing a tallit and t’fillin. Not that it matters since he would never set foot in a church. It’s also a silly analogy because tallit and t’fillin are religious articles used during prayer. Wearing a cross around ones neck is akin to wearing a Star of David or a Chai. While several rabbis responded to Rabbi Rabinovitch, I thought my colleague Rabbi Andrew Sacks put it best. In the JPost blog, he told the following story:

It seems that back in the 18th century, a Christian asked Rabbi Moses Mendelssohn “how can your religion be correct if my religion is correct?” His response was that there is one pasture, but many gates. Or as your scripture puts it, “In my father’s house there are many rooms.” Let the many “gates” to the Kotel, the “gates of righteousness,” be open to all.

This week’s Time Magazine has an interesting article on Catholic-Jewish relations, “Pope Benedict and the Question of Judaism”. It addresses the Pope’s first visit to Israel, but underscores the tension he has caused due to several missteps in his relationship with the Jewish community. In reversing the 1988 excommunication of four bishops of an ultra-traditionalist Catholic group called the Society of St. Pius X (SSPX), he included the Holocaust denying Bishop Richard Williamson who believes the Nazi gas chambers never existed. Further, in a 2006 speech at Auschwitz, he failed to mention anti-Semitism, instead contending that “ultimately the Nazis’ motive in killing Jews was to tear up the taproot of the Christian faith.” He also reintroduced a prayer in the Mass calling for Jews to convert. 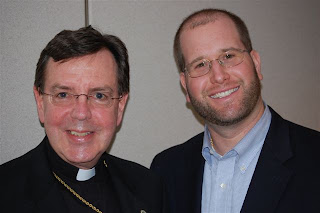 Last month, I joined several local Detroit-area rabbis for a luncheon with the new Archbishop of Detroit, the Most Reverend Allen Vigneron (right). He spoke openly about which aspects of Judaism have influenced his Catholic beliefs. Perhaps, most impressive, he did not hesitate to speak about the recent controversies of the pope with regard to the Jewish people. Rather than seek to defend the pontiff, Archbishop Vigneron, who is likely to named a Cardinal, expressed his deep desire to further dialogue with the Jewish community. I was very impressed of his knowledge of Judaism and his making Catholic-Jewish relations a priority.

It should be no surprise that the Pope’s arrival in Jerusalem yesterday has already caused a fuss. News is circulating around the Web that Pope Benedict walked out on a sheikh delivering an anti-Israel diatribe yesterday in a meeting of interfaith leaders. Rabbi Barry Leff was there and wrote on his blog about his take on what happened. He wrote:

Sheikh Taysir al-Tamimi, chief Islamic judge of the Palestinian Authority, delivered a rant at the gathering at the Notre Dame center in Jerusalem. I don’t speak Arabic — and I presume the Pope doesn’t either — so at the time all I could tell was that the Sheikh was very animated. At one point whatever he said received some modest applause from the Arabic-speaking crowd. According to the Jerusalem Post report, here’s what he was saying: ‘In an impromptu speech, delivered in Arabic at the Notre Dame Pontifical Institute in Jerusalem, Sheikh Tayseer Tamimi, chief Islamic judge in the Palestinian Authority, launched a 10-minute tirade against the State of Israel for confiscating Palestinians’ land and carrying out war crimes against the residents of Gaza.” He also called for the immediate return of all Palestinian refugees, and called on Christians and Muslims to unite against Israel.

The entire text of the Pope’s speech is available here.

Rabbi Leff adds that the Pope quoted from the Torah portion Lech Lecha, saying: “God said to Abram, ‘Go from your country, your kindred and your father’s house for a land I shall show you.”

No matter what the current Pope does or says, the relationship between Catholics and Jews is an important one. All interfaith relations are fragile in nature. I believe we should look positively on the Pope’s visit to Israel and use it as a springboard toward making dialogue between Jewish leaders and Catholic leaders a priority.