Last night, I saw the movie “It’s Kind of a Funny Story.” The movie, based on the 2006 novel by Ned Vizzini, deals with teenage depression and suicide in a very real and honest way. I might have reacted differently to this movie had I seen it before the recent wave of teen suicides in the LGBT community that have made national headlines. Each of the four teen characters in the movie suffer from depression in one way or another. And while none of them is homosexual, watching the movie I was forced to consider the responsibility that I, as a rabbi, have in preaching tolerance and compassion toward the LGBT community to eradicate this epidemic.

The high rate of suicide among gay and lesbian teens has been brought to light in the darkest way possible. Communities have been devastated by the news of gay teens being bullied to the point of taking their own lives. The reaction to these tragedies has been mixed, as have the reactions to the reactions. For example, I’m sure that Clint McCance, the vice president of the Midland, Arkansas School Board, never expected the reaction he received after posting his anti-gay rant on Facebook. That a leader in a school system could make such hurtful and shameful comments publicly on the Web about his fellow human beings is outrageous. It is up to religious leaders to shift the national conversation on LGBT issues to one that prioritizes human dignity and compassion.

On Tuesday, October 19, as Facebook users across the nation were changing their profile pictures to a purple hue to publicize the need for compassion toward the gay community and in memory of the gay teens that killed themselves, another tragedy was taking place. At Oakland University in Michigan, where I serve as a visiting professor of Jewish Studies, yet another gay teen ended his life after being bullied relentlessly since coming out a few months ago. Less than a week earlier on Oakland’s campus, a lunchtime program sponsored by the Gender and Sexuality Center screened the film “Bullied,” a teaching tolerance documentary. The banner advertising the event still hung in the hallway of the student union in the days following Corey Jackson’s death, as if to say “Something more must be done.” 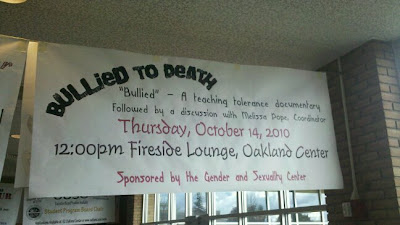 To show my support to the LGBT community, along with millions of others, I added a purple tint to my Facebook and Twitter profile pictures on Spirit Day. All of the responses I received were positive and supportive, except for the comment left on my Facebook page by a politically conservative Orthodox Jew. He simply added the link to a New York Post article by Maggie Gallagher, president of the National Organization for Marriage, titled “Don’t blame me for gay teen suicides.” I read the article and then felt even sadder. Gallagher argues that she doesn’t have blood on her hands when gay teens are bullied and kill themselves. She conveniently shifts the conversation to the gay marriage debate, but at issue here is allowing gay and lesbian teens to feel pride and comfort in society so they don’t get bullied, fall into depression, and eventually take their own lives. Until this horrific trend ends, all Americans have blood on our collective hands.

My teacher, Rabbi Steven Greenberg, recently wrote a powerful opinion piece in The New York Jewish Week, titled “The Cost of Standing Idly By.” The first article of Greenberg’s I ever read was in a rabbinical school class at the Jewish Theological Seminary when he was still a closeted gay man using the pseudonym “Jacob Levado” (a reference to the patriarch Jacob of the Hebrew Scriptures feeling alone). Here, Greenberg relates what happened when he and his partner relocated from New York City to Cincinnati. Soon after they arrived, the rabbi of the local Orthodox congregation called apologetically to inform him that he and his partner were not welcome to attend the synagogue based on a ruling from another rabbi. Greenberg contacted the rabbi who issued the ruling and shared with him that “people who are gay and lesbian who want to remain true to the Torah, are in a great deal of pain. Many have just left the community. Some young gay people become so desperate they attempt suicide.”

Most people would expect the religious leader to respond to that last sentence with some amount of compassion, perhaps deep sadness. However, he replied, “Maybe it’s a mitzvah (commandment) for them to do so.” The speechless Greenberg asked for clarification and was told that what he heard was precisely what the rabbi intended to say. In other words, since homosexuals are guilty for capital crimes according to the Torah, perhaps it might be a good idea for them to do the job themselves. Wow! I wonder how many Jewish people will read that statement and question if this is the right religion for them.

Rather than let this uncompassionate individual silence him or force him to find a more inclusive community, Greenberg came up with a list of three steps his colleagues in the Orthodox rabbinate, and leaders in Orthodox institutions, can and should take at this time. He encourages them to sign the Statement of Principles, which says that “embarrassing, harassing or demeaning someone with a homosexual orientation or same-sex attraction is a violation of Torah prohibitions that embody the deepest values of Judaism.” Second, he calls on Orthodox institutions to sign a letter, initiated by the LGBT advocacy group Keshet, condemning bullying and homophobia in the Jewish community. Third, he states that Orthodox institutions must immediately cut off any support or endorsement of so-called “reparative therapy.”

I would take Greenberg’s call to action a step further and call upon all religious leaders, regardless of faith, to advocate for tolerance and compassion toward the LGBT community. We all stand firm in trying to eradicate the other stressors leading to teenage depression and suicide. Why should the bullying of gay teens be any different? This epidemic is only made worse by the inflammatory comments of people like the Orthodox rabbi in Cincinnati who proposed that it’s a mitzvah for gay teens to kill themselves and Clint McCance, a school board official who wrote on Facebook, “It pisses me off though that we make special purple fag day for them. I like that fags can’t procreate. I also enjoy the fact that they often give each other AIDS and die.”

At this stage it is no longer about the heated and divisive issues like gay marriage or “Don’t Ask Don’t Tell.” It is now a matter of life and death. Teens being bullied until they commit suicide isn’t a political issue; it’s a human issue. Religious leaders across this country: Please stand up and put an end to this national tragedy.