At many synagogues and temples on the High Holidays, people cynically remark that it has the feel of a fashion show. Jewish people, many of whom only attend synagogue on Rosh Hashanah and Yom Kippur each year, get all decked out in their most stylish clothes. 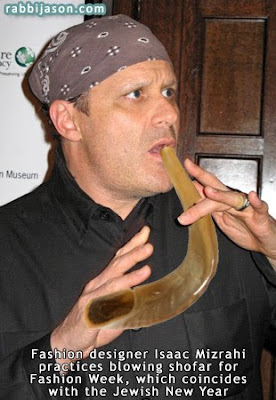 Well, this year, there really will be fashion shows on Rosh Hashanah. Apparently, New York Fashion Week couldn’t find any other dates to hold its popular event. According to the NY Times, if they moved Fashion Week earlier in the calendar it would collide with Labor Day and any later would conflict with the European fashion shows. The NY Times explains:

One store has come up with its own solution to Friday’s Fashion Night Out dilemma. Last year Rosebud, a SoHo boutique that features Israeli designers, opened for New York’s biggest shopping party, but declined this year because of the Jewish holiday. “We took a stand,” Fern Penn, the owner, said. Instead she is celebrating Night Out on Sunday and Monday. “This is how I’m dealing with it,” she explained. Or as Tim Gunn of “Project Runway” might put it, she added, “You make it work.”