Today, there are several Jewish football players in the National Football League. Of course, my favorite is Josh Miller, the New England Patriots kicker. But that’s only because he shares his name with my son Josh. There’s also Jay Fielder (New York Jets), Lennie Friedman (Washington Redskins), Sage Rosenfels (Miami Dolphins), Mike Rosenthal (Minnesota Vikings), and Mike Seidman (Carolina Panthers). There is also Igor Olshansky of the San Diego Chargers, who attended San Francisco Chabad’s Hebrew Academy. Like other Jewish pro athletes these guys are all over the map in terms of their level of commitment and observance to Judaism. 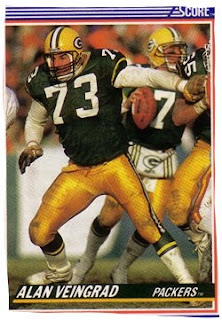 There is one Jewish pro football player who’s Jewish identity is very strong. Former Dallas Cowboys offensive lineman Alan Veingrad was a religiously indifferent Jew when he was an active player, but today he is ultra-Orthodox and goes by the name “Shlomo.” Several articles have been written about Shlomo Veingrad’s transformation, but the most comprehensive is the recent Dallas Morning News article, “Ex-Cowboy finds faith after football.”

Veingrad, who won a Super Bowl championship with the Cowboys in 1993, has his own website that focuses on his life in football and today as a frum Jew. He explains, “As a Dallas Cowboy and member of the Super Bowl championship team of 1992, I got to play for coach Jimmy Johnson and protect the now legendary quarterback Troy Aikman. Being Jewish left me open to a fair amount of good-natured ribbing and kidding, more the by-product of insensitivity than of malice. In the rough and tumble environment of an NFL team, a Jew is an outsider. But now, as I continue to discover even more the rich traditions of Yiddishkeit, I’m happy to be on the inside of Hashem’s army.”

You can also listen to a radio interview of Alan “Shlomo” Veingrad on “JM in the AM” from 2006.