Skip to the content
Like many Jewish people I often get tired of all the marketing geared to a Christian audience. While Christianity is the most common religion in the United States, the Christmas and Easter themed advertising sometimes goes too far. But that doesn’t mean I’m looking for big corporations to draw on Jewish holidays to use in their marketing campaigns.

So, I was surprised when I opened an email message today from Spirit Airlines with the subject line: “Don’t Passover These Low Fares From $19.80* One Way!” At first I thought it was a spoof message from a Jewish humor website. I read the rest of the message and was surprised by the many references to the upcoming holiday of Passover. 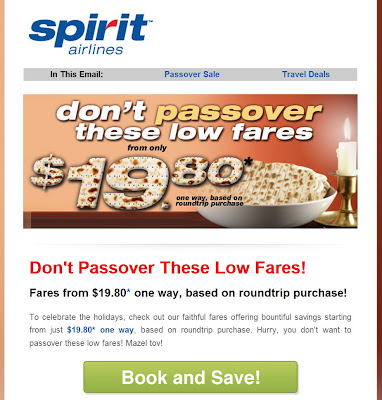 The many references in Spirit Airline’s email to Passover even made question if I had been religiously targeted by the airline. Was it because I had three trips in March with Spirit Air and they noticed my yarmulke? Was it because I have “rabbi” in my email address? I wondered if any other major company had ever conducted a promotion tied into Passover.

The Spirit Airlines Passover promotion is also odd because it was launched the day before Passover. If the company’s intention was to get people to book their Passover flights with Spirit, it’s too late for that. Most of the qualifying flights in the promotion have dates in May and June. Perhaps, the Spirit marketing department should have considered a Shavuot sale (no obvious puns there). The other thing that is odd is that I didn’t receive an Easter promotion from Spirit Airlines even though that (more widespread) holiday takes place this weekend too.

A little research on the Web showed me that Spirit Air used the same silly pun (“Don’t Passover These Deals”) last year in a marketing email. So, I guess their marketing team isn’t that creative after all. And they really overdid it on the kitsch (no need for the “Mazel Tov!” greeting at the end of the ad).

My only comment after flying Spirit thrice last month is that air travel shouldn’t feel like such a PLAGUE (no leg room!), the gate agents should act like the mean PHARAOH forcing me to pay extra for each carry-on bag I bring on board, and I yearn for the days of FREEDOM when complimentary drinks and peanuts were served on flights. Hmmm, maybe there really is a Passover connection with Spirit Airlines!