Stand-up comic and blogger Heshy Fried wrote on his Frum Satire blog yesterday that shuls (synagogues) “in the New York metropolitan area are going to be charging premium prices for premium seats, like those with more legroom” in order to raise more money in these challenging financial times. 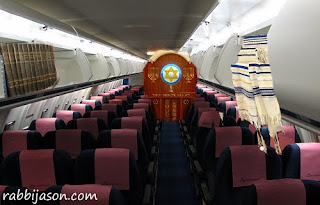 This got me thinking that synagogues aren’t really all that different than the airlines in this regard.

I’m sure it won’t be long before synagogues follow the airlines and start charging for bags too (“Sir, that is an extra-large tallis bag and you’ll have pay $15 if you want to bring that into the shul”).

These comparisons really shouldn’t come as a surprise. After all, both industries are hurting financially right now and are looking to reinvent themselves in a competitive market. Is it really any wonder that the airline named Spirit is currently on strike?