Most Jewish people have never heard of the word “phylacteries,” and yet according to Google, at current count the word appears in over 800 of today’s news articles on the Web. Apparently, a 17-year-old man wrapped in his phylacteries (tefillin in Hebrew) was treated suspiciously on a U.S. Airways plane from NYC headed to Kentucky. In fact the pilot rerouted the aircraft to Philadelphia. 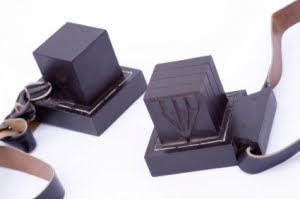 For those who have never heard of tefillin, here’s an explanation from Gather.com: “Phylacteries is actually a Greek word for tefillin. Phylacteries loosely translates as ‘to guard, or to protect.’ In the Torah, they are referenced as something to be worn in recognition of God bringing the children of Israel to Egypt. A set of tefillin includes one for the arm and one for the head of the individual praying. They are typically a set of small cubic leather boxes, painted black and include parchment scrolls inscribed with verses from the Bible. They also have leather straps dyed black to help attach to the observant Jewish individual during prayer.”

I jokingly wondered aloud whether the pilot was just looking out for the observant Jewish teen and felt he’d be better served in Philly rather than Kentucky, which has a small Jewish population. 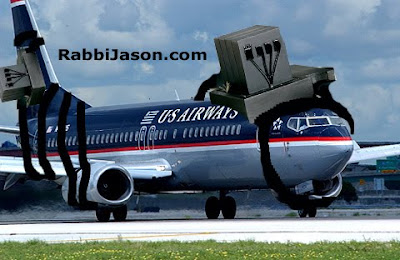 The news story reminded me of a story a friend told me that also involves tefillin and airplane security. He tells the story about a friend of his who took his tefillin on a flight (carry on) several years ago and the security agent saw the odd looking tefillin on the metal detector. He asked what they were and the guy couldn’t remember how to say tefillin in English (phylacteries) and said “prophylactics” by accident. The guard started to laugh and let him go through.

The bottom line here is that wearing two black boxes connected to some black leather straps should really not be considered a potential breach of aircraft security. In fact, after hearing about this, I decided to come up with a list of ten Jewish-related things that may actually pose a higher security threat on board an airplane (with apologies to David Letterman):

10. Waving a Lulav (eye poker)
9. Wrapping yourself in a Tallis (whip passengers with those fringes)
8. My Grandmother’s Chicken Soup (scalding hot, but it’s liquid so its already banned)
7. Wielding a Challah knife (obvious!)
6. Purim Grogger (Metal corners make dangerously sharp weapon)
5. Full Set of the Talmud (heavy enough to bring down an aircraft)
4. Using Jewish Sarcasm (it’s deadly!)
3. Giving a discourse on the history of the Jewish legal tradition (will put pilots to sleep)
2. Matzoh Balls (deadly as thrown object)