Skip to the content
Empathy is never easy. As a man, I confess that I have struggled to be empathetic to the cause of the Women of the Wall (Nashot HaKotel). This group of women has been coming to the Kotel Hama’arivi (Western Wall) in the Old City of Jerusalem for close to a quarter century to pray in protest of the religious freedom they lack.

From thousands of miles away I have followed their plight after each Rosh Chodesh (new month) prayer service they conduct in the relatively small women’s section of the Kotel. In the past year or so I’ve read about the women who are detained or arrested for having the nerve to wear a tallit (prayer shawl) at the Kotel, which according to Israel law is to be treated as an Orthodox synagogue. While I took interest in their civil disobedience and was supportive of their efforts, I felt they were too focused on the Western Wall when in fact they were being allowed to hold their prayer services (women only or mixed) at the Southern Wall (Robinson’s Arch) which was historically more significant anyway.

And then all that changed this morning. Together with about a dozen of my male rabbinic colleagues we woke up well before dawn and walked from our Jerusalem hotel to the Old City. I wrapped myself in my tallit, wound my tefillin (phylacteries) around my left arm and on my head, and joined my colleagues at the mechitza (dividing wall) next to the women’s section. Rather than holding our own separate service we joined the women in their prayers. Several of the women proudly wore tallitot and I even saw one woman wearing tefillin. It was exhilarating to watch the women begin to spontaneously dance during Hallel, the joyous, musical psalms for Rosh Chodesh.

Israeli police — both men and women — patrolled the women’s section. At first I thought this was to ensure their safety as angry protesters have thrown chairs at them in the past, but as I watched I could tell that one of the police officers was warning some of the women wearing tallitot. One female police officer videotaped the entire service, likely to prove that it was handled accordingly. A young man who works at the Kotel began moving shtenders (lecturns) and tables to separate us men from the rest of the men’s section, in effect creating three prayer areas. 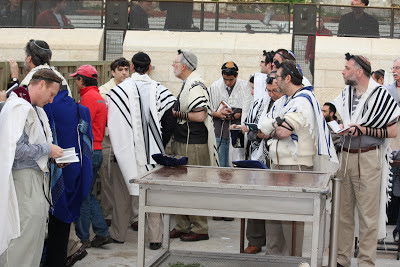 At the conclusion of the Hallel service, I saw some people begin to exit toward the plaza behind the women’s section. I headed over there and saw two of the Israeli paratroopers who were in that iconic photograph at the newly reclaimed Kotel in 1967 after the Six Day War. The men were being interviewed by Israeli media and talking openly about how they liberated the Old City of Jerusalem so that all people would be free to pray there, not only the ultra-Orthodox. It was remarkable to see these paratroopers at the Kotel after seeing that powerful photo since I was a young boy. The Kotel immediately came to take on a whole new meaning for me. And a moment later I developed a much stronger connection to the plight of the Women at the Wall.

I turned around and saw two of my friends and fellow rabbis were being escorted away from the Kotel Plaza by a police officer. Rabbi Robyn Fryer Bodzin and Rabbi Debra Cantor called me over as they were walking behind a female police officer. They told me that she had taken their passports and was going to detain them at the police station. Robyn asked if I would stay with them for as long as I could because they didn’t know what was going to happen. Immediately I began to feel concern for them. The officer wasn’t saying anything and wouldn’t explain where they were going. I was still wearing my tallit and tefillin and feeling guilty that my colleagues were getting in trouble for something that I take for granted.

Before coming to Israel, I traveled through Kiev, Ukraine with several rabbis including Rabbis Fryer Bodzin and Cantor. We spoke to Jewish people there who were forbidden from practicing their Judaism freely in the Former Soviet Union. They would have been arrested for being seen in public wearing a tallit during the Communist era. In Jerusalem this past Friday night we ate dinner with Joseph Begun, who was a Prisoner of Zion in the Former Soviet Union. He shared his amazing story with us, telling us of the years he spent in a Russian jail for the “crime” of being Jewish. This morning we met with former Refusenik Natan Sharansky on the 27th anniversary of his arrival to Israel. He has been charged by Prime Minister Benjamin Netanyahu with coming up with a solution to this problem at the Kotel. Israel was intended to be a place of salvation for the Jewish people. It is the Jewish capital and no Jew should be refused her right to religious practice as our fellow Jews were in the FSU.

Rabbis Fryer Bodzin and Cantor have provided an important example of civil disobedience. To young girls about to become bat mitzvah, these rabbis have articulated why they shouldn’t take their Jewish identity for granted. They have demonstrated to me why it is so critical that women feel comfortable acting as Jews in Israel. I have tremendous respect for both of them and they should be applauded for their courage. After this morning, the Women of the Wall have my respect and my support. Religious freedom must be a priority for Israel. The alternative will have horrific repercussions for the Jewish people.